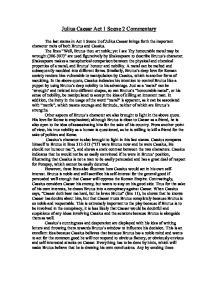 Julius Caesar Act 1 Scene 2 Commentary The last stanza in Act 1 Scene 2 of Julius Caesar brings forth the important character traits of both Brutus and Cassius. The lines "Well, Brutus thou art noble; yet I see Thy honourable metal may be wrought (306-307)" are used figuratively by Shakespeare to describe Brutus's character. Shakespeare makes a metaphorical comparison between the physical and chemical properties of a metal, and Brutus' honour and nobility. A metal can be melted and subsequently moulded into different forms. Similarly, Brutus's deep love for Roman society renders him vulnerable to manipulation by Cassius, which is another form of moulding. In the above quote, Cassius indicates his intention to control Brutus like a puppet by using Brutus's deep nobility to his advantage. Just as a 'metal' can be 'wrought' and twisted into different shapes, so can Brutus's "honourable metal", or his sense of nobility, be manipulated to accept the idea of killing an innocent man. ...read more.

However, these lines also illustrate how Cassius would act in his own self-interest. Brutus is noble and will sacrifice his self-interest for the general good if persuaded well enough that Caesar will oppress the Roman Empire. Contrastingly, Cassius considers Caesar his enemy, but wants to stay on his good side. Thus for the sake of his own interests, he draws Brutus into a conspiracy against Caesar. When Cassius says, "Caesar doth bear me hard, but he loves Brutus" (line 11), he shows that he knows Caesar has doubts about him, but that Caesar trusts Brutus completely because Brutus is so noble and respectable. This is extremely important to the play because if Brutus is to be involved in the conspiracy, it is less likely that Caesar would be doubtful and suspicious of any ideas involving Cassius and the senators because Brutus is alongside them as well. Cassius's cunningness and desperation are displayed with his idea of writing letters and throwing them towards Brutus's window to influence his decision. ...read more.

because "for we will shake him, or worse days endure," indicate that Cassius will go to all lengths to get rid of Caesar as a leader because Caesar's ambitions for Rome are the is the largest of the problems in the Empire in Cassius's opinion, and they must get rid of him or all hell will break loose. Because Caesar is such a powerful man who is currently greatly loved by the general public, the only way Caesar can be conquered and removed from power at the moment is by assassination and it is clear that Cassius is content to get rid of Caesar, so a murder must take place. This last stanza of Act 2 also solidifies the greatness of Brutus in the public and senators eyes because words such as "great opinion" (line 316; in reference to Brutus's opinion) and "thou are noble" (line 306; referring to Brutus) are always used whenever Cassius is speaking of Brutus. This signifies the importance Brutus has towards the success of the assassination of the Roman leader. ...read more.