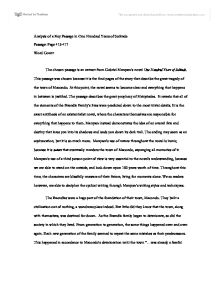 Key Passage in One Hundred Years of Solitude

Analysis of a Key Passage in One Hundred Years of Solitude Passage: Page 415-417 Word Count: The chosen passage is an extract from Gabriel Marquez's novel One Hundred Years of Solitude. This passage was chosen because it is the final pages of the story that describe the great tragedy of the town of Macondo. At this point, the novel seems to become clear and everything that happens in between is justified. The passage describes the great prophecy of Melquiades. It reveals that all of the elements of the Buend�a Family's lives were predicted down to the most trivial details. It is the exact antithesis of an existentialist novel, where the characters themselves are responsible for everything that happens to them. Marquez instead demonstrates the idea of an overall fate and destiny that lures you into its shadows and leads you down its dark trail. The ending may seem as an equivocation, but it is so much more. ...read more.

From generation to generation, the same things happened over and over again. Each new generation of the family seemed to repeat the same mistakes as their predecessors. This happened in accordance to Macondo's deterioration until the town "...was already a fearful whirlwind of dust and rubble being spun about by the wrath of the biblical hurricane..." (M�rquez, p.416). Marquez uses this metaphor of a whirlwind to demonstrate how things kept going round and round, enclosed within a powerful force that is impossible to escape. This comes off as peculiar because when Jose Arcadio Buend�a died, nature showed its condolence with a shower of flowers. Nature was kind to Jose Arcadio Buend�a, because he did not have detrimental intentions. By the end of the novel, the story is corrupt with jealousy, hate, and lust. Therefore Nature had no sympathy for them. One such instance of the cyclical philosophy in the novel is Marquez's usage of the Buend�a family tree. ...read more.

M�rquez conveys that people, and ultimately society, never learn from their mistakes. This is the sole cause of their downfall. Because M�rquez writes in magical realism time is essential to the story, but along with time, he also utilizes the motifs of amnesia and nostalgia. Part of the reason why things were always repeated, and people never questioned it, was because of the amnesia that swept over the people of every generation. After even the most memorable and life-changing experience of the Banana Plant Massacre, the people lost all memory that it ever even existed. Their willingness to believe what was told to them shows their lack of individuality and thought. In fact, they had to put up a sign reminding themselves that God even existed. If a person does not have any recollection of a past event, then 'doing it again' would seem to them, only the first time. This could explain the constant repetition that the town encounters. This would allow no margin for repent or a lesson to be learned. ...read more.