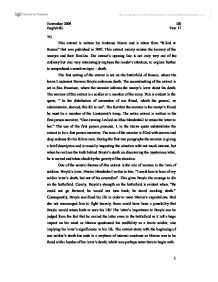 1a) This extract is written by Ambrose Bierce and is taken from "Killed at Resaca" that was published in 1891. This extract mainly salutes the bravery of the martyrs and their families. The extract's opening line is not only very out of the ordinary but also very interestingly captures the reader's attention, to explore further to comprehend a sensitive topic - death. The first setting of the extract is set on the battlefield of Resaca, where the brave Lieutenant Herman Brayle embraces death. The second setting of the extract is set in San Francisco, where the narrator informs the martyr's lover about his death. The narrator of this extract is a soldier or a member of the army. This is evident in the quote, " In the distribution of mementos of our friend, which the general, as administrator, decreed, this fell to me". The fact that the narrator is the martyr's friend he must be a member of the Lieutenant's troop. The entire extract is written in the first person narrative. "One evening I called on Miss Mendenhall to return the letter to her." ...read more.

The fact that Marian started crying on seeing Brayle's blood bothered the narrator as he was unsure whether she would be able to handle truth. The readers feel a sense of tension and stress as the narrator struggles to strike a balance with a just answer yet not letting out the whole truth. Therefore he had to imprudently declare, "He was bitten from a snake". This would evidently give Marian the satisfaction that her lover died on a battlefield and would not be weighed down by the remorse of being responsible for the death in any which way. The last sentence also adds to a surprise element in the extract because the reader's expect the narrator to tell the truth but only in the end are the reasons understood. The complete extract is divided into sixteen small paragraphs. Each paragraph focuses on a particular action of event and takes the plot ahead. Starting with the mention of Brayle's death to unveiling the reasons of the sacrifice and finally dropping the veil by promoting a lie to prevent Marian from falling apart. The flow of these events is logical and the extract gradually moves from past to the present. ...read more.

is almost apparent as throughout the extract Marian's character is depicted strongly and hence the obvious intention of asking the question is to show her strength which develops the reader's interest in the extract. The use of the adjectives "detestable" to describe Marian enable readers to gauge her helplessness and sorrow thus conveying her feelings effectively. On the whole, the content and the style of the extract complement each other. The style used in this extract arouses the emotions necessary for understanding the serious content discussed in this extract, that of the ill effects of wars, death and role of women. It allows the readers to experience the same emotions as those experienced by the families of the martyrs through Marian's feelings of loss for Brayle. This piece has moved me emotionally. It has allowed me to look at war in a manner I have not done before. Thus, the extract gains full attention of the readers as he captivates them not only with simple narrative, but also with an intensity of emotion, which leaves the readers pondering and hence engaging their minds long after the extract has ended to find out the reactions of Marian after hearing the lie. Word Count - 1,506 ?? ?? ?? ?? November 2009 DS English SL Year 11 1 ...read more.