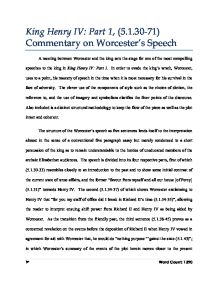 King Henry IV: Part 1, (5.1.30-71) Commentary on Worcester's Speech A meeting between Worcester and the king sets the stage for one of the most compelling speeches to the king in King Henry IV: Part 1. In order to evade the king's wrath, Worcester, uses to a point, his mastery of speech in the time when it is most necessary for his survival in the face of adversity. The clever use of the components of style such as the choice of diction, the reference to, and the use of imagery and symbolism clarifies the finer points of the discourse. Also included is a distinct structural methodology to keep the flow of the piece as well as the plot intact and coherent. The structure of the Worcester's speech as five sentences lends itself to the interpretation almost in the sense of a conventional five paragraph essay but merely condensed to a short persuasion of the king as to remain understandable to the hordes of uneducated members of the archaic Elizabethan audiences. The speech is divided into its four respective parts, first of which (5.1.30-33) resembles closely to an introduction to the past and to show some initial contrast of the current state of tense affairs, and the former "favour from myself and all our house [of Percy] (5.1.31)" ...read more.

The past events are held together making a case for Worcester structured as a timeline from past to present to keep his argument clear that the king is in violation of the agreement "sworn to us in [your] younger enterprise (5.1.71)". To set the stage, the tone of Worcester's speech appears only to the interpreter if the proper diction is taken into account, and helps set the stage for a rhetorical victory on his part. The speech starts off with almost an accusatory string of utterances highlighted by the connotations such as asking the king to remember that they "were the first and dearest of friends (5.1.33)", that suggest condescension and disappointment with Henry IV's recent ventures. Worcester is fast to declare that the Henry IV violated previous agreements by using a rightfully accusatory tone to remind Henry IV of the "oath at Doncaster (5.1.42)", which depicts the king reneging on a prior promise to allies of his while in a position of great power. Though the lynchpin concept, follows directly afterwards and fully explains Worcester's state of apparent contempt with the king; since Henry IV in the time before his schemes to seize power, had sworn to commit "nothing purpose 'gainst the state; Nor claim no further than your new-fall'n right; The seat of Gaunt, dukedom of Lancaster (5.1.43-45)". ...read more.

for fear of swallowing (5.1.62-63)", the reference to the fact that a nobleman of the ruling class became something of a 'problem child' for Worcester after Henry IV ignored the oath to not seize the crown, after kicking out Richard II who was essentially the sparrow in the nest before his deposition. Also, to prevent an even larger problem, Worcester he explains essentially that was the 'sparrow', and to prevent the captures of rebellion leaders such as Hotspur and Mortimer, they "with nimble wing [we] were enforced for safety sake to fly (5.1.64-65)". The symbolism of flight from danger characterizes the basic instinct of Worcester, and the imagery of the sparrow being overrun by a cuckoo that it has raised represents the situation reflected upon his vocal grievances. To reflect upon Worcester's speech is to see a dynamic and fluid timeline of events arranged for ease of understanding on the most basic levels such as the tonal inferences of diction; the conflict of a man who would like to end this rebellion, but cannot since Henry broke his word by illegally seizing the throne and the events that led to it. Stylistically, it is a work of rhetoric and intended to persuade, by capitalizing on structural issues such as sentence division, while the symbolic and imagery reference covertly lend to the context as to inform meaning. ?? ?? ?? ?? 1 Word Count: 1390 ...read more.