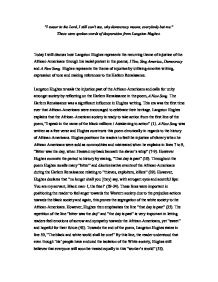 This situation represents the fact that segregation of African-American happens on every level - either minor or very major. The reader felt sympathetic for the, "darker brother" who was isolated and his presence was an embarrassment to the people around him due to his cultural heritage. However, the reader was soon able to see that Hughes still holds optimism when he ironically states, "but I laugh, and eat well, and grow strong" (5-7). The addition of humour and irony shows the confidence of the young boy and that he is not affected by the situation. Hughes expresses optimism for the future in lines 8, "Tomorrow, I'll be at the table when company comes" and "nobody'll dare say to me [him]: eat in the kitchen" (8). From the presentation of humour and irony, Hughes positions the readers to feel guilty about the matter and sympathetic when Hughes states, "they'll see how beautiful I am, and be ashamed" (17). Hughes uses the word "beautiful", symbolising his skin colour, and establishing that his skin colour does not determine who he is, and that he is just like everyone else, "I [he] too am [is] America" (18). ...read more.

the reader was able to realise the determination from Hughes protest and therefore this positions the reader to grasp the fact that equality is still absent in society. Langston Hughes represents the recurring theme of injustice of the African-Americans through his racial protest in the poems; I Too, Sing America, Democracy and A New Song. These three poems were personal messages of Langston Hughes, educating his readers that it is a new beginning for the African-American society. In the three poems, Hughes allows the readers to feel guilty and sorrow by presenting the injustice past of the black people in A New Song. Hughes furthermore, explains the segregation of the African-Americans and protests for freedom in I, Too, Sing America. However in Democracy, Hughes amends the tone and allows the reader to feel hopeful for the future of African-Americans when he shows confidence that equality amongst society will soon exist. All Hughes poems were heavily influenced by the Harlem Renaissance. The Harlem Renaissance was a significant era for all Negros, it was a time when they were able to express their thoughts and feelings through literature, art, music, dance, and for Langston Hughes it was simply through his writing. As his friends said of him, "No one enjoyed being a Negro as much as Langston Hughes." ...read more.