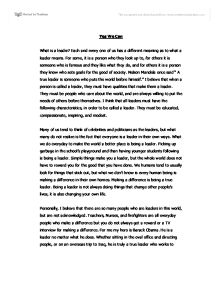 Leadership. For me my hero is Barack Obama. He is a leader no matter what he does. Whether sitting in the oval office and directing people, or on an overseas trip to Iraq, he is truly a true leader who works to improve the lives of others.

Yes We Can What is a leader? Each and every one of us has a different meaning as to what a leader means. For some, it is a person who they look up to, for others it is someone who is famous and they like what they do, and for others it is a person they know who sets goals for the good of society. Nelson Mandela once said " A true leader is someone who puts the world before himself." I believe that when a person is called a leader, they must have qualities that make them a leader. They must be people who care about the world, and are always willing to put the needs of others before themselves. I think that all leaders must have the following characteristics, in order to be called a leader. They must be educated, compassionate, inspiring, and modest. Many of us tend to think of celebrities and politicians as the leaders, but what many do not realize is the fact that everyone is a leader in their own ways. ...read more.

He is a leader no matter what he does. Whether sitting in the oval office and directing people, or on an overseas trip to Iraq, he is truly a true leader who works to improve the lives of others. During the Presidential Election, I heard a story about Obama from 1993. He was a poorly paid social worker in Chicago. He was at the Chicago International Air Port traveling to Washington, for a board meeting when he overhead an Air Port staff notify a lady lined up in front of him that she had to pay $100 dollars to take both of her bags. The young lady broke down in tears and Barack taped her on the shoulder and said "I will pay for you." The young lady was delighted and thanked Obama for helping her out. Fifteen years later, she was able to vote for him to be the President of the United States of America. I share this story because, that is exactly what a true leader does. ...read more.

Volunteering at a local animal shelter is being a leader because you are helping. I guess the meaning of a leader is helping and influencing other to be the best that they can be. Passion is what makes a difference. When passion and spirit meet, they help you become a leader of hope and a leader of compassion. Using your passion to help the world become a better place than it is makes you a leader. A fellow man once said "leadership is the lifting of a man's vision to higher sights, the raising of a man's performance to a higher standard, the building of a man's personality beyond its normal limitations." (From Management: Tasks, Responsibilities, and Practices.) I believe that changing the world and becoming a leader starts from within. You have to change yourself and you have to become a leader before changing the lives of other or influencing others. "My goal is to leave this world a better place than it was before I get here." -Michelle Obama- First Lady ?? ?? ?? ?? ...read more.