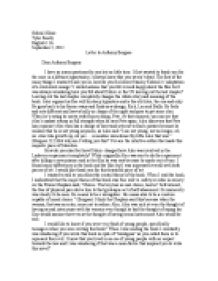 ﻿Gabriel Oleas Tyler Ready English 11A September 5, 2012 Letter to Anthony Burgess Dear Anthony Burgess I have so many questions for you but so little time. I first wanted to thank you for the once in a lifetime opportunity; I always knew that you weren?t dead. The first of the many things I wanted to ask you is, how do you feel about Stanley Kubrick?s? adaptation of a clockwork orange? I would assume that you felt overall happy about the film but I was always wondering how you felt about Kubric or the US leaving out the last chapter? Leaving out the last chapter completely changes the whole story and meaning of the book. Alex regains his free will by sleep hypnotics and is the old Alex, the one and only. He goes back to his former ways and finds new droogs, Rick, Len and Bully. He feels and acts different and leaves bully in charge of the night and goes to get some chai. When he?s eating he meets with former droog, Pete. ...read more.

The boy has no real choice, has he? Self-interest, the fear of physical pain drove him to that grotesque act of self-abasement. Its insincerity was clearly to be seen. He ceases to be a wrongdoer. He ceases also to be a creature capable of moral choice.? (Burgess) I think the Chaplain said this because when the woman, that was an actor, came out to seduce Alex, Alex was sick at even the thought of having sexual intercourse with the woman even though he had the thought of raping her. One would assume that even at the thought of having sexual intercourse Alex would be sick. I would like to know if you were very fond of young people, specifically teenagers when you were writing this book? When I was reading the book I constantly was wondering if you wrote this book in spite of ?hooligans? as you called them or to represent their evil. I know that you lived in an era of young people with no respect towards the law and I was wondering if that was a main factor that inspired you to write this novel? ...read more.

Certainly he borrowed from no other literary source than himself? which is just simply remarkable because you made a normal book into a timeless classic because of all the creativity in it. Another think that I really enjoyed in your book was the use of music and how it influenced Alex?s life. In the book it shows Alex?s uniqueness with Beethoven. I also loved how you mixed music with the Ludovico experiment. In the movie it was Ludwig Van Beethoven in the ninth symphony and in the book it was Beethoven, Bach and many other composers. One could assume that you did this because of your personal life, because I researched you and I saw you were an accomplished musician and I wanted to ask you if because of your personal life you included this in the piece of literature. I wanted to thank you Mr. Burgess for leaving the world such a beautiful majestic work of art and I hope rumours aren?t true that you are deceased, I won?t be expecting a reply Mr. Burgess but I will feel accomplished if I know you will read this Yours truly, Gabriel Oleas ...read more.