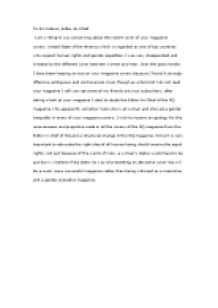 Letter to the editor of GQ magazine complaining about the presentation of women.

﻿To Jim Nelson, Editor-In-Chief I am writing to you concerning about the recent cover of your magazine covers. United State of the America which is regarded as one of top countries who support human rights and gender equalities, I was very disappointed and irritated by the different cover between women and men. Over the past months I have been keeping an eye on your magazine covers because I found it strongly offensive ambiguous and controversial. Even though as a feminist I do not read your magazine I still can see some of my friends are your subscribers, after taking a look at your magazine I start to doubt the Editor-In-Chief of the GQ magazine who apparently somehow looks down at woman and showed a gender inequality in every of your magazine covers. I wish to receive an apology for the unawareness and prejudice made in all the covers of the GQ magazine from the Editor in chief of GQ and a structural change in the GQ magazine. ...read more.

I would want the editor of GQ magazine to give a reason for it or is it just the editor who are not aware of your magazine has strongly offense the whole woman population in the United State or other nations all around the world. In the above magazine cover I am referring to, the cover which has a shot of Justin Timberlake on, its face expression is trying to show the authority of man, and if a person is wearing a suit It is usually regarded as a successful person and what GQ is trying to say is that man are always the top leaders since they are the person who fits the formal suit. The headings of the cover is trying to tell what should a man do, such as a man should dress up stylish to show that they are a ?man?, man should have a high class business wardrobe to appear successful of being a man, and that man should be risk takers to show that they are ?man?. ...read more.

In fact there are millions of successful woman around the world, such as Hilary Clinton, Anne Lauvergeon, or Katherine L. Adams, or some actress such as Emma Watson or Natalie Portman; both of them have enrolled in the top ranked university. In addition, I think the editor of the GQ magazine should be aware of that at now a days, the percentage of women enrolled in university is 51 percent whereas the man has only 37 percent, this data shows us that woman are literally saying, smarter than man and I believe that woman should receive their equality. I hope you will take this letter seriously and will be able to make a change after reading this letter, by altering your direction, I assure your magazine will have a better reputation rather than considered as a magazine which look down at the status of woman. In doing so, you will eventually helped the world to advocate gender equality and to show that GQ magazine treats everyone who belongs to this earth the respects and dignity that they deserved. Yours faithfully Amy Hsin ...read more.