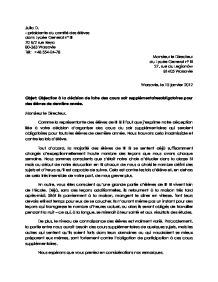 In this assignment, the student is meant to use language to persuade – and the writer does this quite well overall, using a clear structure and a strong tone to further her cause. There is sharp focus on the matter ...

In this assignment, the student is meant to use language to persuade – and the writer does this quite well overall, using a clear structure and a strong tone to further her cause. There is sharp focus on the matter at hand as she brings up three main arguments: perhaps she could switch the order of the paragraphs, bringing the first one to the end, since it is the most convincing one. There is a decisive introduction, in which the writer explains who she is, as well as the objective of the letter – which is a good technique, since it immediately draws the attention of the reader. The conclusion is the usual closing phrase in official letters in French, and it always works.

Evidently, there is a lot of passion in this letter and it transpires immediately, even with relatively simple language, that the writer cares about the cause – this is a great thing, as it shows commitment even in a foreign tongue. The writer must remember, however, about the audience; it is easy enough to employ the wrong voice in French and here it sometimes gets too strong, e.g. “vous êtes conscient” or “insensible de votre part”. Perhaps, then, it would be better to include some sort of suggestions or compromise in the letter in order to soften the tone. The arguments are developed just as much as they should be and many aspects of studying the IB are considered in an intelligent way: the writer always gives concrete and real-life examples without any digression, which is fit for this type of purpose-driven writing. It is obvious that the writer put some thought into the planning of the essay and the goal she wanted it to achieve. Good job.

The language employed is alright for this stage: there are not many experiments here, which is a shame – the letter seems a bit frigid and it is clear that simpler grammatical structures are followed. There seems to be a problem with adjective/adverb/noun order. Instead of “d'exceptionnellement haute nombre”, it should be “d’un nombre exceptionellement haut”. Some spelling errors as well, as in “touts les élèves” (should be “tous les élèves) or “qui voudraient se mieux préparent” (should be “qui voudraient se mieux preparer”), both of which seem to originate from the discrepancy between pronounciation and writing. Moreover, the lexis is somewhat limited: the word “nombre” and “heures” reappears too often and should be substituted with appropriate synonyms. But in general, the relative simplicity of the language means that the mistakes are not too prevalent and the text reads well.