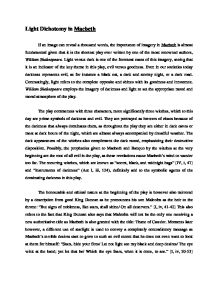 Light Dichotomy in Macbeth If an image can reveal a thousand words, the importance of imagery in Macbeth is almost fundamental given that it is the shortest play ever written by one of the most renowned authors, William Shakespeare. Light versus dark is one of the foremost cases of this imagery, seeing that it is an indicator of the key theme in this play, evil versus goodness. Even in our societies today darkness represents evil, as for instance a black cat, a dark and stormy night, or a dark road. Contrastingly, light refers to the complete opposite and shines with its goodness and innocence. William Shakespeare employs the imagery of darkness and light to set the appropriate mood and moral atmosphere of the play. The play commences with three characters, more significantly three witches, which to this day are prime symbols of darkness and evil. They are portrayed as brewers of chaos because of the darkness that always dominates them, as throughout the play they are either in dark caves or meet at dark hours of the night, which are almost always accompanied by dreadful weather. ...read more.

"Come, thick night/ And pall thee in the dunnest smoke of hell/ That my keen knife see not the wound it makes/ Nor heaven peep through the blanket of the dark/ To cry Hold, hold!" [I, v, 48-52). This excerpt from Macbeth simply cannot get any closer to the imagery of darkness, an application that is so intensively utilized. At this point in time, Lady Macbeth is presenting a soliloquy in a murderous mental state and pleads that her wicked deeds be hidden from heaven and herself by the darkness. There are many more soliloquies in this manner from Lady Macbeth and even Macbeth himself, which are all based along the same line of principles and forms of imagery as they plot the worst murders possible. On the night that Macbeth kills Duncan, a scene between Fleance and Banquo is employed to illustrate the state of luminosity. As you could imagine, the night is unbearably dark: "There's husbandry in heaven/ Their candles are all out" [II, i, 5-6]. This refers to the fact that there is not a star in the sky and the moon is completely down, leaving behind nothing but darkness. ...read more.

Macbeth commissions two murderers and tells them that "the moment on't for't must be done tonight...Of that dark hour, Resolve yourselves apart" [III, i, 138]. This is intended to leave Banquo and his son Fleance dead in the dark night so that no one else should come to witness it. Once again, this is a direct reference to darkness from the wicked act of murder as Banquo is consequently killed according to the agreement. Locations are also very significant in the theme light vs. dark, as Scotland under the rule of Macbeth is also transformed from a bright and light place to a land "shrouded in darkness". Malcolm and Macduff refer to this gloomy transformation with long soliloquies in Act IV, where they cry: "O nation miserable" [IV, iii, 104] All these descriptions portray how the intense agents of darkness in Macbeth have come to spread over even the country that he reigns. This also unravels another striking occurrence: "The Castle that Macbeth lives in, Dunsanine is also indicative of darkness. Dunsanine is similar to the word dungeon a dark and dirty place." [Field of Themes] The imagery plainly does not cease, from character development, to happening events and locations. ...read more.