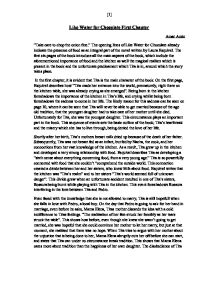 Like Water for Chocolate First Chapter Amar Amin "Take care to chop the onion fine." The opening lines of Like Water for Chocolate already indicate the presence of food as an integral part of the novel written by Laura Esquivel. The first six pages of the book introduce all the main aspects of the book, which include the aforementioned importance of food and the kitchen as well the magical realism which is present in the book and the unfortunate predicament which Tita is in, around which the story takes place. In the first chapter, it is evident that Tita is the main character of the book. On the first page, Esquivel describes how "Tita made her entrance into the world, prematurely, right there on the kitchen table, she was already crying as she emerged". Being born in the kitchen foreshadows the importance of the kitchen in Tita's life, and crying whilst being born foreshadows the sadness to come in her life. The likely reason for this sadness can be seen on page 10, where it can be seen that Tita will never be able to get married because of the age old tradition, that the youngest daughter had to take care of her mother until she died. ...read more.

When Tita tries to argue with her mother about the unjustice that is being done to her, Mama Elena abruptly cuts her off before she can start, and states that Tita can under no circumstance break tradition. This shows that Mama Elena cares more about tradition than the happiness of her own daughter. The disobedience of Tita in talking back to her mother foreshadows the resilience which Tita displays towards her mother later on in the book. Tita, although at first doesn't voice her thoughts, thinks about the tradition which is stopping her from marrying Pedro in more detail. Esquivel describes the doubts and anxieties which spring to Tita's mind concerning the tradition. She thinks about who thought up of the plan, who would look after her since she herself couldn't bear children without a husband of her own, and why was it the youngest daughter, and not the oldest. She is bewildered as to why this tradition cannot be broken. When she first has these concerns, she realizes that these doubts which have manifested inside her mind will never be answered, simply because "In the de la Garza family, one obeyed immeditately". ...read more.

Each chapter has its own recipe. The recipes are intertwined into the story, and closely follow the emotions of the Tita, the creator of these recipes. This is first introduced when she is happy that her favourite christmas rolls are going to be made since Pedro is going to proposed. The theme of this first chapter is one of responsibility and control. Even though Tita loves Pedro, it is her duty to care for her mother until she dies, and she must obey. She has a responsibility to do so. The control which her mother has over her and her duty to comply supersedes any personal wishes of Tita. This control is what begins to waver as the novel continues. In conclusion, the events of the first six pages of Like Water for chocolate foreshadow the events to come in the book. The magical realism is introduced. The relationships are also introduced; the tense relationships Tita has with her mother and her sister Rosaura as well as the close relationship with Nacha become apparent. However, the main focus of these pages is introducing the importance food and the forbidden love between Tita and Pedro. ?? ?? ?? ?? [1] ...read more.