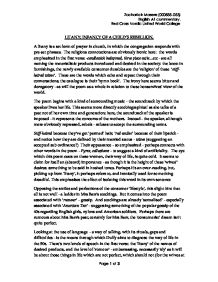 Litany: Infancy of a childs rebellion

LITANY; INFANCY OF A CHILD'S REBELLION. A litany is a set form of prayer in church, in which the congregation responds with pre-set phrases. The religious connotations are obviously ironic here: the words emphasized in the first verse -candlewick bedspread, three piece suite...etc - are all naming the materialistic products introduced and desired in the society: the latest in furnishings, the newly available consumer durables are the 'religion' of these 'stiff-haired wives'. These are the words which echo and repeat through their conversations; the catalogue is their 'hymn book'. The irony here seems bitter and derogatory - as will the poem as a whole in relation to these housewives' view of the world. The poem begins with a kind of surrounding music - the soundtrack by which the speaker lives her life. This seems more directly autobiographical as she talks of a past not of her own time and generation; here, the soundtrack of the speaker is imposed - it represents the concerns of the mothers. Instead - the speaker, although more obviously repressed, rebels - refuses to accept the surrounding terms. ...read more.

If the tiny ladder in the first verse introduced something not quite right, the second verse begins by focusing on the gap between the comfortable appearance of 'public' speech, and the uncomfortable 'reality' underneath. The marriages are simply acknowledged, judged, by the poem as 'terrible'. But not clearly spoken about then - the only sound they produce is 'crackled' - a word suggesting an absence of clear articulation as well as a continuing disturbing energy, like static. The noise of the suppressed conversation about the bad marriages is compared to the crackling of cellophane (a material new to the period, just as 'polyester' is - both materials suggesting something of the artificiality of the time, its false glossiness.) The words are given capitals as though what is being named is a kind of unique place. 'Lounge' - as opposed to front room/back room or sitting room/living room - becomes fashionable at that period of time as more 'posh'. Duffy is able to suggest some of the pretensions of these wives by a mere word, a capital. Like 'Pyrex', it suggests a whole tone of voice, an attitude. ...read more.

boy's words, and not the boy's aggression towards her -and that might seem surprising, the child herself knows that her repetition will indeed shock - and for her, that's the point. She wants to shock; precociously she wants to strike back against the wives' censorship of the world. '...a thrilled malicious pause / salted my tongue like an imminent storm': note particularly the word 'malicious'; this is a conscious rebellion. The satiric energy of the poem has been fuelled by a desire for revenge for the humiliation of the child; all these years later the poet still recalls the names of the women to whom she had to apologise.The 'traditional' punishment for swearing: washing the child's mouth out with soap, after having said something 'dirty'. The poem might be regarded as a recreation of a whole past way of life from that one continuing remembered sensory detail. It also perhaps suggests a kind of motivation for aspects of Duffy's style of expression - to react against that effort to clean up the world and to make language clean and comfortable. ?? ?? ?? ?? Zacharia k Masere (000858-053) English A1 commentary. Red Cross Nordic United World College Page 1 of 3 ...read more.