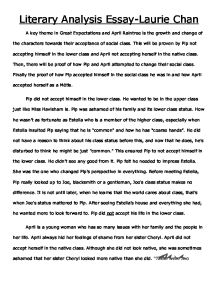 Literary Analysis Essay-Laurie Chan A key theme in Great Expectations and April Raintree is the growth and change of the characters towards their acceptance of social class. This will be proven by Pip not accepting himself in the lower class and April not accepting herself in the native class. Then, there will be proof of how Pip and April attempted to change their social class. Finally the proof of how Pip accepted himself in the social class he was in and how April accepted herself as a M�tis. Pip did not accept himself in the lower class. He wanted to be in the upper class just like Miss Havisham is. Pip was ashamed of his family and its lower class status. How he wasn't as fortunate as Estella who is a member of the higher class, especially when Estella insulted Pip saying that he is "common" and how he has "coarse hands". He did not have a reason to think about his class status before this, and now that he does, he's disturbed to think he might be just "common." This ensured Pip to not accept himself in the lower class. He didn't see any good from it. ...read more.

'Lord strike me dead!' I says each time-and I goes out in the open air to say it under the open heavens-'but wot, if I gets liberty and money, I'll make that boy a gentleman!' And I done it." (pg. 340) Magwitch reveals himself as Pip's secret benefactor and how he got all his wealth. This quote changed Pip's idealistic view of wealth and social class by forcing him to realize that his own status as a gentleman is owed to the loyalty of a lower-class criminal. Year after year, he moved further away from Joe and his lower class. "Pip, dear old chap, life is made of ever so many partings welded together, as I may say, and one man's a blacksmith, and one's a whitesmith, and one's a goldsmith, and one's a coppersmith. Divisions among such must come, and must be met as they come." (pg. 236) Joe comes with a smart and content attitude toward the changes in Pip's social class that have driven them apart, and he shows his goodness and loyalty by blaming the division not on Pip but on the unchangeable nature of the human condition. Pip as a gentleman makes a lot of money and as he gets wealthy, he forgets his family and the people that are important to him. ...read more.

(pg. 184) It was tragic that it had taken Cheryl's death to bring April to accept her identity but she would strive for a better tomorrow now. For her sister and her son, her parents and her people. In conclusion, Pip accepted himself in the social class that he used to be in. Even though he remained in the higher class, Pip realized that he still cared for his loved ones in the lower class. For April, she accepted herself in the social class she was born in. Even though Cheryl's life had to be taken away before April realized how important her heritage was. Pip carried a snobby attitude for a great portion of his life. He treated the people he loved without realization of how he wasn't respectful towards them. April had tried hiding, she had attempted to be someone she's not, she had tried being with someone she didn't love, and she had also undertook to blocking her own sister out of her life. No matter what April did, she couldn't get away from what she really was inside. She was born M�tis. She just didn't feel proud of it nor did she want to be M�tis. Pip and April both had issues with the people in their lives and they both found their true identities from being ashamed of their social class to peace with their lives. ...read more.