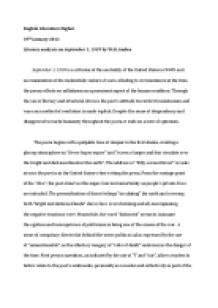 ﻿English Literature Higher 29th January 2012 Literary analysis on September 1, 1939 by W.H. Auden September 1, 1939 is a criticism of the neutrality of the United States in WWII and an examination of the melancholic nature of wars. Alluding to circumstances at the time, the poem reflects on selfishness as a prominent aspect of the human condition. Through the use of literary and structural devices, the poet's attitude towards US isolationism and wars as a method of resolution is made explicit. Despite the sense of despondency and disapproval towards humanity throughout the poem, it ends on a note of optimism. The poem begins with a palpable tone of despair in the first stanza, creating a gloomy atmosphere as ?clever hopes expire? and ?waves of anger and fear circulate over the bright and darkened lands of the earth?. The address of ?Fifty-second Street? reveals at once the poet is in the United States when writing the poem. From the vantage point of the ?dive?, the poet observes the anger, fear and uncertainty as people?s private lives are intruded. The personification of these feelings ?circulating? the earth and covering both ?bright and darkened lands? shows how overwhelming and all-encompassing the negative emotions were. ...read more.

The last line ?we must suffer them all over again? seems to portent that history will repeat itself and men will suffer again. The word ?habit-forming? further signifies the inescapable and cyclical nature of conflicts and the resulting pain. The use of colon in the last line breaks the flow of the sentence and makes it stand out. ?: We must suffer them all again?. The use of enjambment reflects the poet?s natural flow of thought about ?The elderly rubbish they talk/ to an apathetic grave;? while the lack of a perfect rhyme gives readers a sense of fracture, representing how war has torn the world apart. Having conveyed the momentum of the horror dictators induces, the poem comments on the position of the United States in the war. The country? neutrality is immediately made known through ?this neutral air?. The poet?s criticism of her hypocrisy is unmistakable. On one hand, she is a superpower of the world and is known to be the embodiment of democracy and liberty, as symbolized by the ?full height? of ?skyscrapers?. On the other hand, she chooses to remain neutral and not to participate in the war against the dictatorial regimes. ...read more.

The poet admits that he has only ?a voice?, yet he trusts its ability to ?undo the fold lies?, where ?fold lies? refer to the public?s hopeful fantasy and the untruthfulness of the ?Authority?. Despite the use of negative diction such as ?hunger?, ?no choice? and ?die?, the last line of the stanza??we must love each other or die?? sends a strong message of hope. The only condition for the hope?that we must all ?love each other??is poignant yet sincere. The poet believes that no party can be exempted from the war, as ?there is no such thing as the State/ and no one exists alone?. This might also express the poet?s hope that, as a super power, America will not ?exist alone? and will join the war. Amidst all the gloom and despair, hope can be found at the end of the poem. While the world may be ?defenseless under the night?, ?points of light? are ?dotted everywhere???wherever the Just/ exchange their messages?. The capitalization of the word ?Just? seems to highlight the eventual triumph of moral righteousness. The poet expresses the wish to be among the righteous, to demonstrate an ?affirming flame? amid ?negation and despair?. The poem culminates with this fire imagery, symbolizing optimism, the poet's fervent desire to spread hope and positivity, and possibility ultimate victory. ...read more.