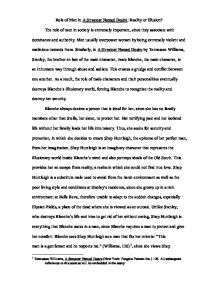 Role of Men in A Streetcar Named Desire: Reality or Illusion? The role of men in society is extremely important, since they associate with dominance and authority. Men usually overpower women by being extremely violent and malicious towards them. Similarly, in A Streetcar Named Desire by Tennessee Williams, Stanley, the brother-in-law of the main character, treats Blanche, the main character, in an inhumane way through abuse and sadism. This creates a grudge and conflict between one another. As a result, the role of male characters and their personalities eventually destroys Blanche's illusionary world, forcing Blanche to recognize the reality and destroy her security. Blanche always desires a person that is ideal for her, since she has no family members other than Stella, her sister, to protect her. Her terrifying past and her isolated life without her family leads her life into misery. Thus, she seeks for security and protection, in which she decides to create Shep Huntleigh, the epitome of her perfect man, from her imagination. Shep Huntleigh is an imaginary character that represents the illusionary world inside Blanche's mind and also portrays ideals of the Old South. This provides her an escape from reality; a realm in which she could not find true love. Shep Huntleigh is a substitute male used to avoid from the harsh environment as well as the poor living style and conditions at Stanley's residence, since she grows up in a ...read more.

Stanley reveals to Mitch the destitute life of Blanche's past, ruining their relationship and causing both of them to have lost a romantic relationship that would help ease their broken emotional and mental states. Mitch ultimately chooses Stanley over Blanche, since he realizes that he can not deny the truth. Not only that, but he wants a true relationship, not one based on deception and fallacy. Blanche encounters a person whom she desires, whose name is called Allan. He is the perfect figure that Blanche wanted, since he has all the characteristics that Blanche desires. However, when Blanche realizes that he is a homosexual, she begins to reject. Allan chooses his desire, which is his mutual love for another man, over Blanche's wish, which is for Allan to only love her eternally without anybody else. As a result, Allan committed suicide and led her into a broken world. Blanche sees Allan as "a boy, just a boy, when I was a very young girl. When I was sixteen, I made the discovery---love." (95)4. She maintains to hope that she would still have a chance to meet the person whom she desires, yet she thinks that it is impossible due to her age. Even though Blanche still loves Allan, she can not tolerate his homosexuality, since she realizes that he did not love her after several years of marriage. ...read more.

He is extremely sadistic, since he takes pleasure in obliterating Blanche and watching her slowly disintegrating into a breakdown. As a result, due to all the hatred that he has brought onto Blanche and his misinterpretations of Blanche's sayings, Stanley rapes Blanche, which symbolizes his masculine triumph and illusion losing to reality. Therefore, he is seen as the executioner of Blanche: "He hates me. Or why would he insult me? The first time I laid eyes on him I thought to myself, that man is my executioner!" (93)6. Stanley would do anything to save his relationship with Stella with the upcoming birth of the baby. Hence, Stanley is a dominant figure, ruling over the household, trying to keep his relationship with Stella tight. The role of men has negatively put an enormous impact onto Blanche in such a way that it destroys her, leading into her metaphorical death. They greatly made her realize all the mistakes that she has committed, which then shattered her illusionary world. Unable to cope with the situation, Blanche has a mental breakdown and eventually gets rejected by everyone else. As Blanche sinks deeper into her illusionary world and becomes even further from society, now that her illusion becomes a reality after the rape. In order to protect herself from any harm, she becomes trapped in her illusion and becomes insane. Hence, Blanche then realizes the true world and it eventually destroys her, leading her breakdown into insanity. ...read more.