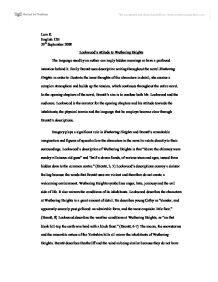 Lara K. English 12B 20th September 2008 Lockwood's attitude to Wuthering Heights The language used by an author can imply hidden meanings or have a profound intention behind it. Emily Bront� uses descriptive writing throughout the novel Wuthering Heights in order to illustrate the inner thoughts of the characters in detail; she creates a complex atmosphere and builds up the tension, which continues throughout the entire novel. In the opening chapters of the novel, Bront�'s aim is to confuse both Mr. Lockwood and the audience. Lockwood is the narrator for the opening chapters and his attitude towards the inhabitants; the physical terrain and the language that he employs become clear through Bront�'s descriptions. Imagery plays a significant role in Wuthering Heights and Bront�'s remarkable imagination and figures of speech allow the characters in the novel to relate directly to their surroundings. Lockwood's description of Wuthering Heights is that "above the chimney were sundry villainous old guns" and "half-a-dozen fiends, of various sizes and ages, issued from hidden dens to the commen centre." ...read more.

Lockwood tries to guess the family and social relationships by assuming that young Cathy is Heathciff's wife, and eventually Heathcliff explains that his wife and son are dead and that Cathy is his "daughter-in-law, therefore she must have married" Heathcliff's son. (Bront�, 11) Lockwood's narration builds up the atmosphere and tension, which is then continued throughout the entire novel. He analyses the characters and includes details about how Heathcliff will "love and hate equally under cover, and esteem it a species of imperitance to be loved or hated again." (Bront�, 3) According to the language that Lockwood uses, the audience is able to sense the sarcasm, and the humour that is included in his tone, which Heathcliff does not appreciate. Lockwood asks Heathcliff, "Not bitten, are you?" and Heathcliff replies, "If I had been, I would have set my signet on the biter." (Bront�, 5) Lockwood is rather self-satisfied and is therefore not afraid to be insensitive to people that he meets. ...read more.

It is Bront�'s intention to make the reader think about the meanings that Lockwood's dreams could represent. Due to the fact that Lockwood is as confused as the audience is at the beginning of the novel, Bront� is able to confuse the audience by using Lockwood as a tool therefore she reinforces her intention by including the dreams at the beginning of the novel. Bront� deliberately tries to confuse the reader throughout the opening three chapters of the novel and she successfully achives this goal because of the language and diction that she uses. She communicates a variety of messages through Lockwood as a narrator and it is difficult for the reader to constantly be aware of what each character is saying, at various points during the first few chapters. Bront� wants to show the complicated history of the inhabitants at Wuthering Heights and Thrushcross Grange so therefore the opening chapters of the novel create a vibrant image of the complex families, build up the tension, and create the atmosphere that is then continued throughout the entire novel. The opening chapters are a confusing introduction to the dysfunctional characters of Wuthering Heights. ...read more.