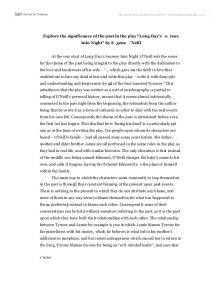 Explore the significance of the past in the play "Long Day's Journey Into Night" by Eugene O'Neill At the very start of Long Day's Journey Into Night, O'Neill sets the scene for the theme of the past being integral to the play directly with the dedication to the love and tenderness of his wife - "... which gave me the faith in love that enabled me to face my dead at last and write this play - write it with deep pity and understanding and forgiveness for all of the four haunted Tyrones." This admittance that the play was written as a sort of autobiography, a partial re- telling of O'Neill's personal history, means that it seems almost intrinsically connected to the past right from the beginning, the intimation from the author being that he wrote it as a form of catharsis in order to deal with the real events from his own life. Consequently the theme of the past is introduced before even the first Act has begun. The idea that he is 'facing his dead' is a particularly apt one as at the time of writing the play, the people upon whom its characters are based - O'Neill's family - had all passed away some years before. His father, mother and elder brother Jamie are all portrayed in the same roles in the play as they had in real life, and with similar histories. The only alteration is that instead of the middle son being named Edmund, O'Neill changes the baby's name to his own, and calls it Eugene, having the fictional Edmund take the place of himself within the family. The main way in which the characters seem constantly to trap themselves in the past is through their constant blaming of the present upon past events. There is nothing in the present to which they do not attribute any blame, and none of them in any way seem to blame themselves for what has happened to them, preferring instead to blame each other. ...read more.

weary roads is right. Get you nowhere fast. That's where I've got-nowhere. Where everyone lands in the end, even if most of the suckers won't admit it", and so all of the characters have devised their own way of 'escaping', which controls the way in which they act throughout the play. For Jamie, the feeling that he hasn't actually achieved anything because he has never been able to move on is something that he only finally admits to when drunk, but which reveals the sense of hopelessness he feels from being stuck in a loop. Slightly later in the play he confides to Edmund "I'd begun to hope, if she'd beaten the game, I could, too..." - his hope that his mother had shrugged off her addiction, and that the future would no longer be a repetition of the past had been very important to him, as it offered a way out. However, that hope disappeared, and he resorted back to his usual escape of drinking alcohol, which is what he does for most of the duration of the play. Tyrone also drinks in order to escape the past, although unlike Jamie he also attempts to escape the repetition of the past by denying the fact that it is being repeated - he refuses to recognise Mary's symptoms until they are undeniably obvious, preferring to believe her lies rather than admit to what is going on. In that respect, he is unlike Jamie, whose cynicism prevents him from being able to overlook things as he chooses. Mary, however, does not attempt to escape the past in the same way that Jamie and Tyrone do, but prefers, though the use of morphine, to escape the present and return to the happiest phase of her life, during the early years of her marriage to Tyrone and her time at the convent, playing the piano. Reminders of the present, such as her hands, which have become unsightly due to rheumatoid arthritis, appal her, and as the play progresses and the morphine takes her over more and more, she regresses further and further back into the past. ...read more.

That the rest of the family seem ashamed that Mary would make such an accusation and blame it on her mental instability, when they are perfectly happy to blame and accuse each other all the time is rather ironic, and so Mary's illness serves to highlight the problems with the rest of the family and the way in which they function. In terms of the message of the play, and what the audience take away with them, it seems that the past is also of significance, in that the play is something of a warning as to what the consequences might be if people never moved on. Of course, it is therefore quite appropriate that O'Neill wrote it as a part of his own moving on, and his own way of putting the past behind him. The ending of the play is almost anticlimactic in that it just finishes, with no conclusion or rounding-off of the story - simply that the end of the day has been reached, and this too mirrors the idea that there is no end and therefore no past when the past is relived as if it is the present and the future, too. Of all the themes in the play, the past is by far the most significant of them all, not least because the author wrote it as a semi-autobiographical work. It is the driving force behind the way the characters act, the way they interact and the way in which the atmosphere deteriorates from a rather hopeful one at the beginning of the play into one rather devoid of hope at the end, as the 'Long Day's Journey Into Night' is completed, with Mary fully under the influence of the morphine and the other characters having apparently given up on her salvation and also their own conversation. The feeling of being trapped in the past - what O'Neill was attempting to get rid of by 'facing his dead' and writing it all down as a work of fiction - dominates the atmosphere of the play, without which the power of the piece would be lost. s'notes ...read more.