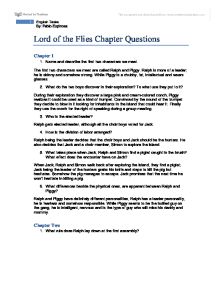 Lord of the Flies Chapter Questions

Lord of the Flies Chapter Questions Chapter 1 1. Name and describe the first two characters we meet. The first two characters we meet are called Ralph and Piggy. Ralph is more of a leader; he is skinny and somehow strong. While Piggy is a chubby, fat, intellectual and wears glasses. 2. What do the two boys discover in their exploration? To what use they put to it? During their exploration they discover a large pink and cream-colored conch, Piggy realizes it could be used as a kind of trumpet. Convinced by the sound of the trumpet they decide to blow in it looking for inhabitants in the island that could hear it. Finally they use the conch for the right of speaking during a group meeting. 3. Who is the elected leader? Ralph gets elected leader, although all the choir boys voted for Jack. 4. How is the division of labor arranged? Ralph being the leader decides that the choir boys and Jack should be the hunters. He also decides that Jack and a choir member, Simon to explore the island. 5. What takes place when Jack, Ralph and Simon find a piglet caught in the brush? What effect does the encounter have on Jack? When Jack, Ralph and Simon walk back after exploring the island, they find a piglet; Jack being the leader of the hunters grabs his knife and steps to kill the pig but hesitates. ...read more.

Chapter Three 1. How successful is Jack in his second hunt? In the second hunt Jack is unsuccessful; well he does not hunt any pigs. 2. Who is the only one who helps Ralph build the huts? Simon is the only one who helps Ralph build the huts. 3. What conflict arises between Ralph and Jack? Ralph starts to criticize the hunting of Jack and his group. He implies that jack and his gang evade the real work by going hunting. Jack complains that the boys want meat and soon they will be successful in their hunt. 4. Why is Jack so intent on Hunting? Jack is so intent on hunting because he claims that the boys want meat. But it could also be because he wants to evade group work at all costs. 5. Why is Ralph so concerned about the "littluns"? Ralph is very concerned about the littluns because most of them have nightmares or are unable to sleep. He is also concerned because one of them was lost and he doesn't want it to happen again. Ralph tells his concerns to Jack but he does not care. 6. What is revealed about Simon in this chapter? At the end of this chapter it is revealed that Simon is a good person, well he helps the littluns grab their fruits. ...read more.

The same night Ralph makes a meeting and none of the hunters go to it 9. Describe the confrontation of Jack and Piggy Piggy furious at the hunters decides to criticize their immaturity and their lack of responsibility by not setting the fire. But Jack really excited and proud slaps Piggy and begins to mimicking his voice. Finally Jack accepts responsibility for the fire. Chapter 5 Summary When Ralph walks across the beach he has different thoughts about his life and his situation. He is mad about his hair which is now long and always falls into his eyes. He makes a meeting and blows the conch, the boys gather on the beach. Ralph in the meeting state all the problems he is concerned of, this including, boys not wanting to build shelters, not gathering drinking water, not maintaining the fire signal, not using the "toilet" area. He surely affirms that there are absolutely no monsters or such thing in the island, but one of the littluns claims that he has seen the beast. The small boys are scared it can come at night, and the meeting turns into chaos. Jack being brave and proud states that if there is a monster, he and his hunters will kill it. They run away and Ralph, Simon and Piggy are the only left. The chapter ends with a littlun crying which echoes along the beach. ?? ?? ?? ?? ...read more.