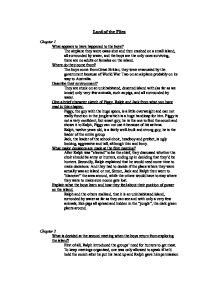 Lord of the Flies Chapter 1 What appears to have happened to the boys? The airplane they were owas shot and then crashed on a small island, all surrounded by water, and the boys are the only ones surviving, there are no adults or females on the island. Where do they come from? The boys come from Great Britian, they were evacuated by the government because of World War Two on an airplane probably on its way to Australia. Describe their environment? They are stuck on an uninhabitated, deserted island with (as far as we know) only very few animals, such as pigs, and all surrounded by water. Give a brief character sketch of Piggy, Ralph and Jack from what you have read in this chapter. Piggy, the guy with the huge specs, is a little overweight and can not really function in the jungle which is a huge handicap for him. Piggy is not a very confident, but smart guy, he is the one to find the couch and shows it to Ralph, Piggy can not use it because of his asthma. Ralph, twelve years old, is a fairly well-built and strong guy, he is the leader of the entire group. Jack, the leader of the school choir, headboy and prefect, is ugly looking, aggressive and tall, although thin and bony. ...read more.

What new concepts are introduced into the island society with the discussion of the "snake-thing" and the disappearance of the mulberry faced boy? It is the first time that the boys feel danger and fear. They are responsible for the "mulberry-faced boy"'s death as everyone got so excited about their rescue, about the bonfire, and that guy just gets lost, dies. This is the first time they feel death, but their "childish" reaction to it is that they start laughing and say that there is no such thing as a big snake, although they in the end all realize that they are in danger, that they all are scared and that they have to take care of themselves carefully, no parents or teachers, no grown-ups at all are around. Chapter 3 What two reasons are there for builiding the huts and for Jack's hunting? a) practical b) psychological In both cases, use a quotation from the text to support your answer. Both reasons apply to both, on one hand they need the huts to protect themselves from rain and maybe animals and on the other they are useful to offer a feeling of "security" and "protection" to the guys by having those little homes. "So we need shelters as a sort of -" "Home." ...read more.

Roger and Maurice both commit acts of aggression against "littluns" in this chapter when they kick over sand castles and throw stones at them. Why do they now feel free to commit these acts and what restrains them from carrying their violence any further? The Littluns are the, as mentioned, lowest group, Roger and Maurice are members of the powerful, high-ranked, do not have respect of the Littluns and do what they want, destroy the Littluns' sand castles, but they don't care since they are not using those any more to play with. Roger and Maurice are recalling civilization, remember that they would be punished by parents or even law (unlikley in this case) which then makes them restrain from going any further. Offer two reasons, psychological and practical for the use of masks. The group feel a boost in their power, as they now look scary and frightening to each other, now hope they can scare animals. Another reason might be so that they can change their "identity", momentarily they are scared of the things going on and feel the will to abuse power, and if they'd wear masks, no one would see and identify them. How are the hunter affected by the act of killing? What does their reaction tell us about their changing values? The hunters now know that they can kill and that there is something to kill out there. ...read more.