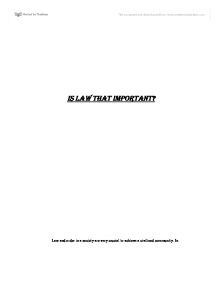 Lord of the Flies: is law that important?

Is law that important? Law and order in a society are very crucial to achieve a civilized community. In the Lord of the Flies that is shown in a clear way. In the absence of law and order on the island the boys succumb to their inherent appetites for evil and destruction. The children on the island follow this trend because of competition, individuality, and their wickedness. Firstly, the evil in the boys comes out because of rivalry with others. This competition comes when the boys decide on electing a leader. Jack, the past leader of the choir, doesn't get elected, but he is granted to be a leader of the hunters. Jack makes himself a person in charge because he doesn't give the boys hard jobs like keeping the fire going, but instead he focuses on more "fun" things to do like to kill pigs." We want meat."(Golding 51) By this Jack gives the boys short term achievements such as meals, but this leads the boys to savagery because they start doing things that they wouldn't do before such as killing the pig or killing people like Simon and Piggy. ...read more.

The boys begin to focus on themselves and only make actions to have "fun." This individualism leads to great pains and suffering of other people. Piggy and Simon are good examples. The boys start killing pigs for justified reasons such as meat, but soon this action is no longer a necessity to feed the hungry crowd, but a desire that is fuelling their savagery. Their cruelty gives every individual a sense of power over the objects or people that they kill. They are also filled with happiness when they sing "'Kill the pig. Cut her throat. Bash her in.'" (79), and this is how they fulfill their "fun". Ralph is the person who refrains from this savagery for a long time, but he is pressured into the group of the savages and becomes one of them because he wants to have his share of "fun" as well. "'I hit him with the spear, I wounded him.'" (125) This Ralph's wildness progresses, and he wants to hurt Robert when he acts as the pig. ...read more.

The contrast to the Roger in the opening of the book is when Roger is overpowered by evil to the extent where he kills Piggy. "High overhead, Roger, with a sense of delirious abandonment, leaned all his weight on the lever" (200) Roger is one of many kids who are experiencing this trend. At the end of the book, Ralph, one of the most resistant boys on the island to savagery, is the person who cries because he knows that evil was successful, and even he, a boy who wanted to have a fair and a civilized society, joined the barbarians. This proves that evil was successful on the island without laws, and it would prevail if the laws aren't set in a society to restrain savagery from conquering people. In conclusion, without rules to restrain the boys' inner wickedness the children will succumb to sin. These reasons explain why the boys fail to have a civilized society: rivalry, independence from each other, and their natural evil. As Aristotle once said "At his best, man is the noblest of all animals; separated from law and justice he is the worst. ...read more.