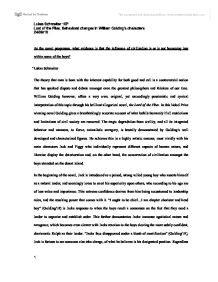 Lord Of the Flies: Progression of Evil

As the novel progresses, what evidence is that the influence of civilization is or is not becoming less within some of the boys? ??Lukas Schmelter The theory that man is born with the inherent capability for both good and evil is a controversial notion that has sparked dispute and debate amongst even the greatest philosophers and thinkers of our time. William Golding however, offers a very own, original, yet exceedingly pessimistic and cynical interpretation of this topic through his brilliant allegorical novel, the Lord of the Flies. In this Nobel Prize winning novel Golding gives a breathtakingly accurate account of what befalls humanity if all restrictions and limitations of civil society are removed. The tragic degradation from civility, and all its integrated behavior and manners, to fierce, animalistic savagery, is brutally demonstrated by Golding's well developed and characterized figures. He achieves this in a highly artistic manner, most vividly with his main characters Jack and Piggy who individually represent different aspects of human nature, and likewise display the deterioration and, on the other hand, the conservation of civilization amongst the boys stranded on the desert island. ...read more.

It is this lack prioritization in tasks and assignments that is key to Jacks transformation into a savage. After discovering face paint, Jack becomes so consumed by his determination to kill that he completely forgets about the signal fire, and since all choir boys were following his lead, there was no one to keep the fire burning and thus they missed a chance for rescue when a ship did actually pass by. Jack as a result has failed to prioritize civilization, morality, and rescue and so demonstrates that he no longer believes in civil society and its rules. Instead he has given himself into the animalistic savage instincts that, according to Golding, dwell within every human being. He emphasizes his new actuality by brutally slaughtering a pig, and therefore achieving what he had failed to do earlier in the novel due to civil constraints, that he had now shed in the place of blood thirst and violence. These events are consequently the turning point in Golding's novel, since Jack becomes the role model for the other boys, who consequently follow his transformation in to a savage, and as a result jeopardize the existence of everything that Ralph has worked for until then. ...read more.

Two of such characters are Jack and Piggy who each represent a different aspect of humanity. Jack on one hand represents the savageness as well as the evil that all men, according to Golding, are capable of. In addition his behavior signifies the deterioration of civilization amongst the boys, and is subsequently the catalyst for the brutal violence and slaughter that grips the island. On the other hand there is Golding's intellectual, whiny character Piggy, who clearly embodies the intellectual, rational as well as scientific side of human nature. Through clever characterization, Piggy also symbolizes the conservation of civilization, as he desperately tries to uphold social order and well-being through his intuitive and equally curious nature. Overall the Lord of the Flies truly embodies the pessimistic and cynical view of its author William Golding whose superb novel touches on the very controversial question, of whether man is born inherently good or evil. The books' exciting characters give a very insightful view into human nature and leave one thinking about whether we too have evil dwelling deep within us, perhaps hidden behind a mask of false optimism and morality. ?? ?? ?? ?? Lukas Schmelter 10P Lord of the Flies, Behavioral changes in William Golding's characters 24/09/10 1 ...read more.