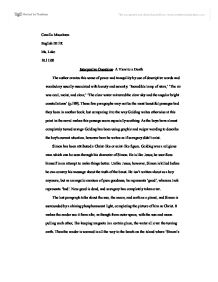 Camilla Mauritzen English IB 1K Ms. Lake 10.11.08 Interpretive Questions- A View to a Death The author creates this sense of peace and tranquility by use of descriptive words and vocabulary usually associated with beauty and serenity. 'Incredible lamp of stars,' 'The air was cool, moist, and clear,' 'The clear water mirrored the clear sky and the angular bright constellations' (p.189). These few paragraphs may not be the most beautiful passages had they been in another book, but comparing it to the way Golding writes otherwise at this point in the novel makes this passage seem especially soothing. ...read more.

Unlike Jesus, however, Simon is killed before he can convey his message about the truth of the beast. He isn't written about as a boy anymore, but as an angelic creature of pure goodness, he represents 'good', whereas Jack represents 'bad'. Now good is dead, and savagery has completely taken over. The last paragraph talks about the sun, the moon, and earth as a planet, and Simon is surrounded by a shining phosphorescent light, completing the picture of him as Christ. ...read more.

This passage is used to show that this is the first actual murder of the book. It shows how symbolic it is that Simon is the one to be murdered and how significant his death is. This is the first real murder. He was a Christ-figure and was killed in trying to save the boys. The Lord of the Flies had told him he would die if he didn't turn savage, '"You know perfectly well you'll meet me down there."' (p.178). When the Lord of the Flies says 'me,' he means savageness, but because Simon refuses to 'meet' him, he dies, which is why he symbolizes goodness. ...read more.