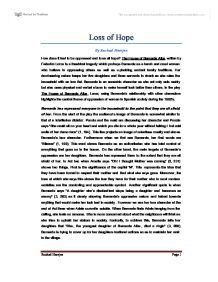 Loss of Hope By Rushad Heerjee How does it feel to be oppressed and lose all hope? The House of Bernarda Alba written by Federico Lorca is a theatrical tragedy which portrays Bernarda as a harsh and cruel woman who believe in oppressing others as well as upholding ancient family traditions. Her domineering nature keeps her five daughters and three servants in check as she rules the household with an iron fist. Bernarda is an eccentric character as she not only acts rashly but also uses physical and verbal abuse to make herself look better than others. In the play The House of Bernarda Alba, Lorca, using Bernarda's relationship with other characters highlights the central theme of oppression of women in Spanish society during the 1900's. Bernarda has repressed everyone in the household to the point that they are all afraid of her. From the start of the play the audience's image of Bernarda is somewhat similar to that of a totalitarian dictator. Poncia and the maid are discussing her character and Poncia says "She could sit on your heart and watch you die for a whole year without talking that cold smile of her damn face" (1, 194). This line projects an image of relentless cruelty and shows Bernarda's true character. ...read more.

This is very important twist in the play since Bernarda does not want her girls to be noticed and refuses to let them show their true colours. She wants them to appear as nuns, not as eligible young women. It is also interesting to note that black is the colour representative of the fascist rule in Spain at that time. Not only was fascism the political situation but it was also alive and well in Bernarda's home, with her as the ultimate dictator. From this, we can clearly see why Adela wears a green dress in Act 1. It shows her creativity and individuality as well as her desire to escape from her mother's stranglehold. This is reiterated when she tries to give Bernarda a "round fan decorated with red and green flowers" (1, 204). The second symbol which shows oppression is Bernarda's cane. The cane is the symbol of sovereignty and power over the household. She uses the cane for support as well as a weapon like in act one when she advances on Angustias with it and when she beats Martirio in act two "coming down and hitting her with her cane" (2, 248). A noteworthy moment in the play is when Adela snaps Bernarda's cane in two as it signifies the end of Bernarda's rule over Adela and the household, and due to this, everything spirals out of control. ...read more.

This play is seen as the tragedy for rural Spanish women who will never have the opportunity to choose a husband as well as expressing the costs of repressing the freedom of others. As the play unfolds, we delve deeper and deeper into the house of Bernarda Alba starting off in a room near the entrance hall and ending up in the coral, which shows the gradual exposure of all the family secrets as well as the audiences broadening of just how twisted life in that era was. This play presents themes on the oppression of women and control over others that are also present in the modern world. Women are still treated as the inferior sex. Men usually get the advantage when applying for a job, while the common stereotype of the modern world is that women stay at home and look after the family despite their other capabilities. We also see people controlling other humans to make them do what they want. The common household servant, despite her choice to work, still cannot refuse a command given by her employer. This strongly relates to Bernarda as she oppresses her servants to the point that they hate her with a burning passion. As Martin Luther King Jr. once said, "The ultimate tragedy is not the oppression and cruelty by the bad people but the silence over that by the good people." ?? ?? ?? ?? Rushad Heerjee Page 1 ...read more.