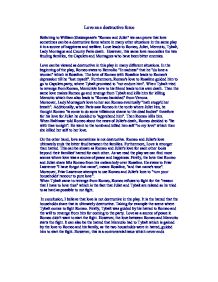 Love as a destructive force

Love as a destructive force Referring to William Shakespeare's "Romeo and Juliet" we can prove that love sometimes can be a destructive force where in many other situations in the same play it is a source of happiness and welfare. Love leads to Romeo, Juliet, Mercutio, Tybalt, Lady Montague and County Paris death. However, this same love reconciles the two feuding families, the Capulets and Montagues who have been bitter enemies. Love can be viewed as destructive in this play in many different situations. In the beginning of the play, Romeo states to Benvolio "In sadness" that he "do love a woman" which is Rosaline. The love of Romeo with Rosaline leads to Romeo's depression till he "lost myself". ...read more.

Additionally, when Paris saw Romeo in the tomb where Juliet lies, he thought Romeo "is come to do some villainous shame to the dead bodies" therefore for his love for Juliet he decided to "apprehend him". Then Romeo kills him. When Balthasar told Romeo about the news of Juliet's death, Romeo decided to "lie with thee tonight". He went to the tomb and killed him self "to my love" which then she killed her self to her love. On the other hand, love sometimes is not destructive. Romeo and Juliet's love ultimately ends the bitter feud between the families. Furthermore, Love is stronger than hatred. This can be shown as Romeo and Juliet's love for each other looks beyond their families' hatred for each other. ...read more.

In conclusion, I believe that love is not destructive in the play. It is the hatred that the households share that is ultimately destructive. Taking for example the scene where Tybalt comes to fight Romeo. Firstly, Tybalt was guided by his hatred to Romeo and the will to revenge from him for coming to the party. Love as a source of peace in Romeo didn't want to start the fight. However, the love between Romeo and Mercutio starts the fight. It can also be the hatred that Mercutio had to Tybalt which is gained by the love to Romeo and his family, as the two households were in hatred, guided him to start the fight. However, this is a controversial issue which never ends. ...read more.