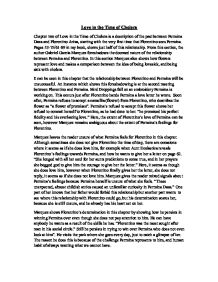 Love in the Time of Cholera

Love in the Time of Cholera Chapter two of Love in the Time of Cholera is a description of the past between Fermina Daza and Florentino Ariza, starting with the very first time that Florentino sees Fermina. Pages 53-75/61-89 in my book, shows just half of this relationship. From this section, the author Gabriel Garcia Marquez foreshadows the doomed nature of the relationship between Fermina and Florentino. In this section Marquez also shows how flowers represent love and makes a comparison between the idea of being lovesick, and being sick with cholera. It can be seen in this chapter that the relationship between Florentino and Fermina will be unsuccessful. An instance which shows this foreshadowing is at the second meeting between Florentino and Fermina. Bird Droppings fall on an embroidery Fermina is working on. This occurs just after Florentino hands Fermina a love letter he wrote. Soon after, Fermina refuses to accept a camellia (flower) from Florentino, who describes the flower as "a flower of promises". ...read more.

Marquez gives the reader mixed signals about Fermina's feelings because Fermina herself is unsure of what she feels. "These unexpected, almost childish antics caused an unfamiliar curiosity in Fermina Daza." One part of her knows that her father would forbid this relationship but another part wants to see where this relationship with Florentino could go, but his determination scares her, because she is still unsure, and he already has his heart set on her. Marquez shows Florentino's determination in this chapter by showing how he persists in winning Fermina over even though she does not pay attention to him. He can have anybody he wants as a result of the skills he has. "Florentino was the most sought after man in his social circle." Still he persists in trying to win over Fermina who does not even look at him". He visits the park where she goes every day, just to catch a glimpse of her. ...read more.

Showing flowers as a symbol for love, and then comparing this love to cholera is a contrast. When Florentino gets worried that Fermina will not reply to his love letter, he gets sick. This sickness is so real, that his godfather mistakes it for Cholera. Later in chapter two, to remind himself of Fermina, Florentino eats flowers and drinks cologne, to remind him of her smell. This results in him getting very sick. This "drunken" love which Florentino has, can be interpreted as obsession, even a state of being mentally disturbed, since he deliberately poisoned himself with cologne. However, his love for Fermina is a sickness, because it drives him to do all these things, which it turn make him ill. Because of this, it can be seen that love, like cholera is a literal sickness for the characters in the novel. In conclusion, chapter two sets the scene for the relationship between Fermina and Florentino, and foreshadows its developments. Marquez introduces the idea of flowers to symbolize love, and also lovesickness as a physical illness. ...read more.