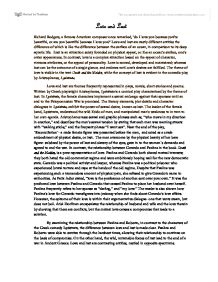 Love or Lust? Women in Lysistrata compared to Women in Death and the Maiden

Love and Lust Richard Rodgers, a famous American composer once remarked, 'do I love you because you're beautiful, or are you beautiful because I love you?' Love and lust are vastly different entities the difference of which is like the difference between the surface of an ocean, in comparison to its deep aquatic life. Lust is an attraction solely founded on physical appeal, or like an ocean's surface, one's outer appearances. In contrast, love is a complex attraction based on the appeal of character, virtuous attributes, or the appeal of personality. Love is earned, developed and maintained; whereas lust can be the outcome of a single glance, and endures until one's desires are fulfilled. ...read more.

Aristophanes uses sexual and graphic phrases such as, "who move in my direction in erection," and describes the men's sexual tension by stating that each man was roaming streets with "walking sticks," and the frequent phrase "I want sex". Near the end of the play, `Reconciliation`- a nude female figure was presented before the men, and acted as a crude embodiment of physical desire, or lust. The men overcome by the physical beauty of her bare figure- subdued by the power of lust and slavery of the eyes, gave in to the women`s demands and agreed to end the war. In contrast, the relationship between Gerardo and Paulina in the book Death and the Maiden, is a pure representation of love. ...read more.

However, the epitome of their love is within their argumentative dialogue- one that vents steam, but does not boil. Ariel Dorfman encapsulates the relationship of husband and wife and the love therein by showing that there are conflicts, but the mutual love causes a compromise that leads to a solution. By examining the relationship between Paulina and Roberto, in contrast to the characters of the Greek comedy Lysistrata, the difference between love and lust is made clear. Paulina and Roberto were able to survive through the harshest times, allowing their relationship to continue on the basis of compromise. On the other hand, the wild, untamable forces of lust lead to the end of a war in Ancient Greece. Love and lust are contrasting entities, nestled in opposite spectrums. ?? ?? ?? ?? ...read more.