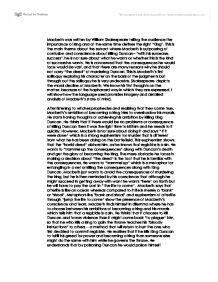 Macbeth was written by William Shakespeare telling the audience the importance of king and at the same time defines the right "King". This is the main theme about the extract where Macbeth is outpouring of confusion and conscience about killing Duncan- "with his surcease, success", he is not sure about what he wants or whether this is the kind of success he wants. He is concerned that the consequences he would face would be vast, and that there are many reasons why he should not carry "the deed" of murdering Duncan. This is Macbeth's first soliloquy exploring his character on the basis of the judgments but through out the soliloquy he is very undeceive. Shakespeare depicts the moral decline of Macbeth. We know his first thoughts on the matter, because of the haphazard way in which they are expressed. I will show how the language used provides imagery and detailed analysis of Macbeth's state of mind. After listening to witches prophecies and realizing that they come true, Macbeth's ambition of becoming a king tries to overshadow his morals. ...read more.

throne teaches his "bloody instructions" to others -- a method that will return to hurt the one who first decided to commit regicide. He realizes that if he kills King Duncan to fulfill his greed for power and becoming a king than someone else might do the same with him while he governs the throne. He understands that by poisoning Duncan he would poison himself indirectly. He refers to a "chalice" which is an image for life, light, good. However, Macbeth talks about a "poisoned chalice," which leads to the opposite connotations: death as opposed to life, darkness as compared to light, evil instead of good. Another reason for Macbeth to not murder Duncan is because Duncan double trusts Macbeth- as "his kinsman and his subject" and as a host it is his duty to "shut the door" against murderers and protect Duncan, not to "bear the knife [him] self." He struggles in particular with the idea of murdering a man-a relative, no less-who trusts and loves him. During Macbeth's battle with his conscience and morals, we come across one of the important themes of the play that is what and who makes a right king. ...read more.

Macbeth tells her that he is happy with his new honor of being the Thane of Cawdor and wants to enjoy the honor of serving Duncan and "Not cast aside so soon." However, Lady Macbeth gets outraged and says to Macbeth that he can only dream about being a king when he is drunk. He tells him that he is going back on his words and not "account[ing] thy love." She accuses him of being "afeard" and insults him by calling him a "coward." She says that Macbeth is "like the poor cat i'th'adage" who wants to get the fish but doesn't want to get wet and spends the time thinking and not doesn't jump into the water. She wants Macbeth to kill Duncan and not spend time thinking about it. Shakespeare shows that Macbeth's state of mind is changing, his conscience is pre-eminent, showing that he still has reason in his thoughts. However, in the end he is overcome by his ambition with Lady Macbeth's influence. This shows the effects that this constant goading and degradation has had on Macbeth since the first soliloquy as he then decides to carry on "the deed." This is what makes Macbeth one of the most tragic character in English Literature. ...read more.