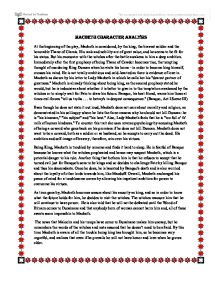 Macbeth Character Analysis At the beginning of the play, Macbeth is considered, by the king, the bravest soldier and the honorable Thane of Glamis. His rank and nobility are of great value, and he seems to be fit for his status. But his encounter with the witches after the battle awakens in him a deep ambition. Immediately after the first prophecy of being Thane of Cawdor becomes true, the tempting thought of murdering King Duncan when he visits his home - in order to become king himself, crosses his mind. He is not totally ambitious and cold-hearted as there is evidence of love in Macbeth as shown by his letter to Lady Macbeth in which he calls her his "dearest partner of greatness." Macbeth is already thinking about being king, as the second prophecy stated he would, but he is indecisive about whether it is better to give in to the temptation awakened by the witches or to simply wait for Fate to draw his future. ...read more.

Being King, Macbeth is troubled by remorse and finds it hard to sleep. He is fearful of Banquo because he knows what the witches prophesied and hence may suspect Macbeth, which is a potential danger to his rule. Another thing that bothers him is that he refuses to accept that he turned evil just for Banquo's sons to be kings and so decides to challenge Fate by killing Banquo and thus his descendants. Once he does, he is haunted by Banquo's death and is also worried about the loyalty of other lords towards him, like Macduff. Overall, Macbeth exchanged his peace of mind for a troublesome crown by allowing his impatient ambition for power to overcome his virtues. As time goes by, Macbeth becomes unsure about his security as king, and so in order to know what the future holds for him, he decides to visit the witches. ...read more.

When Macduff encounters Macbeth, the hint of consciousness left in Macbeth is shown through his refusal to fight Macduff, as he is already feeling too guilty for killing his family. Macbeth is sure he will kill Macduff too because he is born of a woman. Eventually Macbeth and Macduff fight, and Macbeth dies after Macduff informs him that he was born with a scissarian birth. Macbeth maintains his dignity at the end and proves not to be a coward by dying in battle. In conclusion Macbeth was tempted and cheated by the witches. His own ambitions and passions deceived him into changing his virtues, in return for power. At the end he is wary of life and fully aware of the deception. He pays all the consequences of his betrayal but still dies like the brave soldier that he once was. By: Mohamad Naji - Year 10 ...read more.