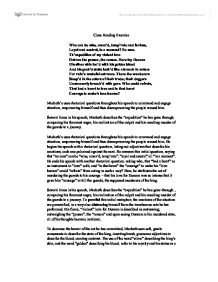 Close Reading Exercise Who can be wise, amaz'd, temp'rate and furious, Loyal and neutral, in a moment? No man. Th'expedition of my violent love Outran the pauser, the reason. Here lay Duncan His silver skin lac'd with his golden blood And his gash'd stabs look'd like a breach in nature For ruin's wasteful entrance. There the murderers Steep'd in the colors of their trade; their daggers Unmannerly breech'd with gore. Who could refrain, That had a heart to love and in that heart Courage to make's love known? Macbeth's uses rhetorical questions throughout his speech to command and engage attention, empowering himself and thus disempowering the people around him. Several times in his speech, Macbeth describes the "expedition" he has gone through, comparing his foremost anger, his realization of the culprit and his resulting murder of the guards to a journey. ...read more.

To parallel this initial metaphor, the emotions of the situation are personified, in a way also distancing himself from the treacherous acts he has performed. His fierce, "violent" love for Duncan is described as outrunning; outweighing the "pauser", the "reason" and upon seeing Duncan in his murdered state, all of his thoughts became irrational. To decrease the horror of the act he has committed, Macbeth uses soft, gentle consonants to describe the state of the king, inserting harsh, gruesome adjectives to describe the blood, creating contrast. The use of the word "silver" describing the king's skin, and the word "golden" describing his blood, refer to his royalty and his status as a well-liked member of society. The use of the gentle, appealing word "lace" to describe the blood on his body creates an almost pleasant picture, which is sharply contrasted by the succeeding gruesome description of his "gash'd stabs". ...read more.

Their daggers; the instruments of their trade, are described as being "unmannerly breech'd", meaning that the daggers are improperly dressed, or wearing indecent clothing which personifies them by comparing the stained blood and "gore" as an unseemly garment. The king is described throughout the passage in such a noble manner by Macbeth to excuse himself from murdering the guards. Throughout the passage, Macbeth approaches the entire matter with metaphors and also personifies the instruments of murder and the reasoning behind it; suggesting a distance, a mental barrier between himself and his treacherous acts, a possible indication of the fact that he, too, cannot bear to consider the bloody truth. His words are highly poetic and, also revealing of the deep ironies, of which he must be aware. He has destroyed the fabric of nature; he has paved the entrance of ruin. As he speaks, lies, manipulates and deceives, we feel a heightened state of awareness; realizing the dramatic irony of it all. ...read more.