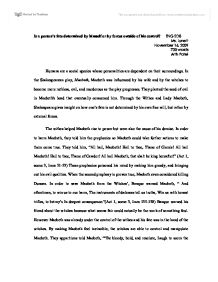 Is a person's fate determined by himself or by forces outside of his control? ENG 2D8 Ms. Lynett November 16, 2009 705 words Arth Patel Humans are a social species whose personalities are dependent on their surroundings. In the Shakespearean play, Macbeth, Macbeth was influenced by his wife and by the witches to become more ruthless, evil, and murderous as the play progresses. They planted the seed of evil in Macbeth's head that eventually consumed him. Through the Withes and Lady Macbeth, Shakespeare gives insight on how one's fate is not determined by his own free will, but rather by external forces. The withes helped Macbeth rise to power but were also the cause of his demise. In order to harm Macbeth, they told him the prophecies so Macbeth could take further actions to make them come true. ...read more.

By making Macbeth feel invincible, the witches are able to control and manipulate Macbeth. They apparitions told Macbeth, ""Be bloody, bold, and resolute, Laugh to scorn the power of man, for none born of woman shall harm Macbeth... Be lion-mettled, proud and take no care of who chafes, who frets, or where conspires are: Macbeth shall never vanquished be until Great Birnam Wood to high Dunsinane Hill shall come against him." (Act 4, scene 1, lines 90-92, 103-104). After hearing this, Macbeth feels assured because he assumes everyone is born of a woman, and trees cannot walk. He does not realize Macduff did not have a natural birth and the English camouflaged themselves as trees. The witches fill Macbeth with a false sense of confidence and this leads to his eventual downfall. ...read more.

A little water clears us of this deed; how easy is it then!" (Act 2, scene 2, lines 82-83, 86-87) After seeing Macbeth shocked, she says cleaning the blood would erase the crime. As the play progresses, Macbeth starts to follow this ideal and he had no regard for the lives he had taken in order to stay king. To conclude, Lady Macbeth was able to transform Macbeth into an evil and murderous killer. In conclusion, it is impossible to avoid the influence of others. This is evident in Macbeth because he did not have the willpower or the reason to commit the evil crimes such as killing Duncan if it was not for the Witches and Lady Macbeth. The coupled influence of the Witches and Lady Macbeth changed Macbeth from a kind and loyal military officer to a ruthless and villainous King. ?? ?? ?? ?? ...read more.