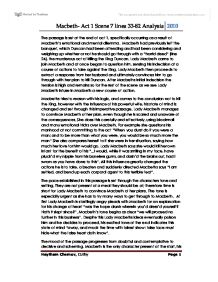 The passage is set at the end of act 1, specifically occurring as a result of Macbeth's emotional and mental dilemma. Macbeth had previously left the banquet, which Duncan had been attending and had been considering and weighing up whether or not he should go through with a "horrid deed" (line 24), the murderous act of killing the King Duncan. Lady Macbeth came to join Macbeth and at once began to question him, sensing his indecision at a course of actions to take against the King. Lady Macbeth then proceeds to extract a response from her husband and ultimately convinces him to go through with her plan to kill Duncan. After Macbeths initial indecision the tension is high and remains so for the rest of the scene as we see Lady Macbeth infuse in Macbeth a new course of action. ...read more.

All this influence greatly changed the actions he is to take, a beaten and suddenly directed Macbeths says "I am settled, and bend up each corporal agent to this terrible feat". The pace established in this passage is set through the characters tone and setting. They are not present at a meal they should be at; therefore time is short for Lady Macbeth to convince Macbeth of her plans. The tone is especially urgent as she has to try many ways to get through to Macbeth. At first Lady Macbeth is startlingly angry pleads with Macbeth for an explanation for his change of heart "was the hope drunk wherein you'd dress'd yourself? Hath it slept since?". Macbeth's tone begins as clear "we will proceed no further in this business". Despite this Lady Macbeths ideas eventually poison him and he decides to proceed, his excited tone at the end indicates this state of mind "away, and mock the time with fairest show: false face must hide what the false heart doth know". ...read more.

Many motifs and symbols are used to convey deeper meaning in this passage. For example Shakespeare refers to the image of a "babe", this contrasts the more aggressive and argumentative mood in this passage. Also "like the poor cat i' the adage" is used to convey a sense of deeper meaning as Macbeth here is related to the image of "the cat who would eat fish but would not wet her feet", this proverb refers to Macbeths state of mind and by contrasting his decisions to the cat in the proverb it gives a greater sense of meaning in the passage because the characters state of mind is conveyed. The diction of certain words, how they sound, highlights the meaning further. For example harsh words such as the "dagger", and "...marked with blood" are used, these reiterate the darker and evil ever present in the passage, and the effects this has. ...read more.