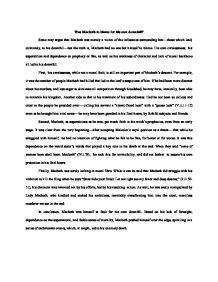 Was Macbeth to blame for his own downfall? Some may argue that Macbeth was merely a victim of the influences surrounding him-those which lead, ultimately, to his downfall-but the truth is, Macbeth had no one but himself to blame. His own carelessness, his superstition and dependence on prophecy or fate, as well as his weakness of character and lack of moral backbone all led to his downfall. First, his carelessness, while not a moral fault, is still an important part of Macbeth's descent. ...read more.

even as he brought him vital news- he may have been guarded in his final hours, by faithful subjects and friends. Second, Macbeth, as superstitious as he was, put much faith in the witch's prophecies, even from an early stage. It was clear from the very beginning-after accepting Malcolm's royal position as a threat- that while he struggled with himself, he had no intention of fighting what he felt to be fate, for better or for worse. It was this dependence on the weird sister's words that played a key role in his death at the end. ...read more.

As well, he was easily manipulated by Lady Macbeth, who kindled and stoked his ambitions, inevitably transforming him into the cruel, merciless murderer we see in the end. In conclusion, Macbeth was himself at fault for his own downfall. Based on his lack of foresight, dependence on the supernatural, and feeble sense of morality, Macbeth pushed himself over the edge, spiralling in a series of unfortunate events, which, at length, led to his untimely death. ?? ?? ?? ?? ...read more.