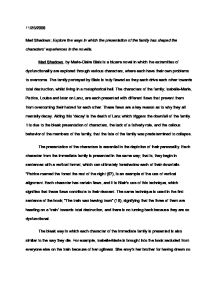 11/26/2008 Mad Shadows; Explore the ways in which the presentation of the family has shaped the characters' experiences in the novella. Mad Shadows, by Marie-Claire Blais is a bizarre novel in which the extremities of dysfunctionality are explored through various characters, where each have their own problems to overcome. The family portrayed by Blais is truly flawed as they each drive each other towards total destruction, whilst living in a metaphorical hell. The characters of the family; Isabelle-Marie, Patrice, Louise and later on Lanz, are each presented with different flaws that prevent them from overcoming their hatred for each other. These flaws are a key reason as to why they all mentally decay. Aiding this 'decay' is the death of Lanz which triggers the downfall of the family. It is due to the bleak presentation of characters, the lack of a fatherly role, and the callous behavior of the members of the family, that the fate of the family was predetermined to collapse. The presentation of the characters is essential in the depiction of their personality. Each character from the immediate family is presented in the same way; that is, they begin in sentences with a vertical format, which can ultimately foreshadow each of their downfalls. ...read more.

He has a gold cane, and a wig in which he uses to cover up his aching knee and aging features. He is eventually trampled to death by a horse. But as he is dying, his true identity is being revealed; "Patrice watched the gold cane disappear... and also Lanz's wig as it parted from his scalp... Lanz's false beard was falling apart" (75). Therefore it is the presentation of Lanz that shaped his unfortunate outcome. The lack of stability in the family can only contribute to the dysfunctionality as once Lanz dies, a chain reaction of events takes place. Without a fatherly figure, there is no stability in the family and therefore they cannot bring themselves back from their world of disdain. Lanz plays the key, archetypal role of the fatherly figure that comes in to save the family. However, once he dies Isabelle-Marie is left with that role and she struggles to carry it out. "Isabelle-Marie, close mouthed, her soul withered, had worked too hard in the fields. She was growing thinner, uglier, as crabbed as an old witch"(90). ...read more.

Their callous behavior towards each other is a key reason as to why they died horrid deaths. In any family where there are cold relationships, a happy ending is not obtained. This is exactly the case in this novel as right from the start, heartless emotions are portrayed through Isabelle-Marie on the train; "aloof and motionless... Isabelle-Marie sat... against the window. Her alarming eyes, so often full of anger seemed glued to backbone (15). It is the cold, crude behavior of the family that caused them to separate themselves and it is this behavior that foreshadowed their horrible descents. The bleak presentation of the characters, the lack of a fatherly role and the callous behavior of the family are all factors in the destruction of the family, as they were foreshadowed right from the start to end tragically. Blais genius technique of vertical alignment is a great way in which the downward presentation of characters foreshadowed their descent over the course of the novel. By exploiting the family's dysfunctionality through the presentation of characters, one is now able to determine the direction the character is heading in, and ultimately their fate for the rest of the novel. ?? ?? ?? ?? ...read more.