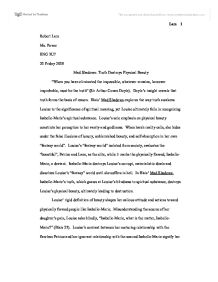 Robert Lam Ms. Power ENG 3U7 20 Friday 2009 Mad Shadows: Truth Destroys Physical Beauty "When you have eliminated the impossible, whatever remains, however improbable, must be the truth" (Sir Arthur Conan Doyle). Doyle's insight reveals that truth forms the basis of reason. Blais' Mad Shadows explores the way truth awakens Louise to the significance of spiritual meaning, yet Louise ultimately fails in recognizing Isabelle-Marie's spiritual substance. Louise's sole emphasis on physical beauty constricts her perception to her vanity and godliness. When harsh reality calls, she hides under the false illusions of luxury, unblemished beauty, and self-absorption in her own "fantasy world". Louise's "fantasy world" isolated from society, evaluates the "beautiful", Patrice and Lanz, as the elite, while it marks the physically flawed, Isabelle-Marie, a deviant. Isabelle-Marie destroys Louise's corrupt, materialistic ideals and dissolves Louise's "fantasy" world until she suffers in hell. In Blais' Mad Shadows, Isabelle-Marie's truth, which gnaws at Louise's blindness to spiritual substance, destroys Louise's physical beauty, ultimately leading to destruction. Louise' rigid definition of beauty shapes her callous attitude and actions toward physically flawed people like Isabelle-Marie. Misunderstanding the source of her daughter's pain, Louise asks blindly, "Isabelle-Marie, what is the matter, Isabelle-Marie?" (Blais 23). Louise's contrast between her nurturing relationship with the flawless Patrice and her ignorant relationship with the scarred Isabelle-Marie signify her descent into illusion. ...read more.

She fails to recognize the vulnerability that her superficial beauty and materialistic possessions create until her final collapse. Her inability to tend to her weaknesses slowly drains her mental and physical strength. Unable to survive in society, Louise cannot step down from her imaginary throne in order to tend to her flaws. Louise's obsession for materialistic desire provides a weak refuge from reality's storm. In order to escape cancer, "Louise redid her make-up several times a day. In place of the dressing she applied, warm, evil-smelling creams which changed the color of her skin. Age was hollowing her features, straining her neck and her brow" (Blais 92-93). Louise's physical beauty peaks during her youth, but declines as she ages. The symmetrical balance between her physical beauty and mental health causes both to decay at the same rate. Louise's face, her patchwork of colour, further alienates her from society as the patchwork makeup on her scar makes her look more like a monster than a human being. Once Louise's cancer reaches a point of no return, her sanity and illusions crumble along with her body. In order for Louise to survive society's harsh reality, she must balance her perspective and lifestyle choices. Even at fourty, Louise's obsession with physical beauty leads her to the "...false security of luxury. ...read more.

"'God in heaven,' Louise prayed, 'have mercy!' But her mirror did not answer" (Blais 121). While Louise reflects physical beauty, God mirrors spiritual beauty. God's just nature casts Louise's veil of darkness by ignoring her call for redemption. In Judges 10, God tells the sinners, "You have forsaken me and served other gods, therefore I will deliver you no more. Go and cry out to the gods which you have chosen, let them deliver you in the time of your distress." Louise's worship of amoral gods such as Patrice, "The Beautiful Beast", ignores the real God from whom she ultimately needs help. Unlike Isabelle-Marie, who endures Louise's manipulation, God abandons Louise in her self-imposed hell in order for Louise to understand Isabelle-Marie's feeling of pain and suffering. Louise initiates her "fantasy" world and burns along with all of her false riches; Louise suffers as a sinner and retreats into isolation; Louise loses the opportunity for redemption. Louise's destruction arises from her inability to grasp the significance of spiritual beauty. In fact, her spiritual sterility marks her as a sinner and creates a hell based on her hate relationship with Isabelle-Marie. Isabelle's role to awaken Louise to spiritual substance only results in Louise's retreat into isolation and Louise's call for redemption. The severity of Louise's tyranny holds no place in society and she dies along with her "fantasy world." Blais' Mad Shadows measures how truth demands spiritual beauty and destroys false desire. ...read more.