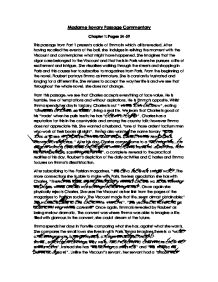 Madame Bovary Passage Commentary Chapter 1: Pages 54-59 This passage from Part 1 presents a side of Emma in which all is revealed. After having recalled the events of the ball, she indulges in reliving the moment with the Viscount and contemplates what might have happened. She imagines that the cigar case belonged to the Viscount and that he is in Paris where he pursues a life of excitement and intrigue. She visualises walking through the streets and shopping in Paris and this causes her to subscribe to magazines from Paris. From the beginning of the novel, Flaubert portrays Emma as immature. She is constantly frustrated and longing for a different life. She refuses to accept the way her life is and we see that throughout the whole novel, she does not change. From this passage, we see that Charles accepts everything at face value. He is humble, free of temptations and without aspirations. He is Emma's opposite. Whilst Emma spends her day in fantasy, Charles is out "in the rain and snow", eating "omelettes at farmhouse tables", living a real life. ...read more.

The Viscount made that life, seem almost obtainable;" She wanted equally to die and to live in Paris". "She yearned to travel or to go back to living in the convent." Once again, Emma is revealed by Flaubert as being mellow dramatic. The convent was where Emma was able to imagine a life filled with glamour. In the convent, she could dream of the future. Emma spends her days in Yonville comparing what she has, against what she wants. She compares the small town she lives in with Paris. Emma imagines there is a "world of trailing gowns, of high mystery, of anguish cloaked under a smile...extravagant as kings, they were, full of idealistic ambitions and wild enthusiasms". Instead she has "the boring countryside" and "the imbecile petits bourgeois". Unlike the Viscount's servant, her servant had a "smock that was full of holes" and who "wore no stockings inside his shabby slippers". Flaubert cleverly emphasises the discrepancy between Emma's lifestyle and the Viscount's in this paragraph allowing the reader to understand Emma's motivation. Flaubert uses vivid detail throughout this passage. ...read more.

her feet, surprised when nothing came; then, as day came to its end, with an ever greater sadness, she was longing for the morrow". As though she is lost in the sea of Yonville, Emma is waiting for someone to save her from her dissatisfying and unfulfilled life. Flaubert also uses colloquial expressions to emphasise the ironic nature of his comments on Charles. "...and for pulling teeth he had a devil of a grip", "Eventually, to stay in the swim, he took out a subscription to La Ruche m�dicale, a new journal", "And sometimes she told him about what she had reading...or some little tale about the upper crust". As well as colloquial expressions, Flaubert uses metaphors. "It was Paris, rippling like the ocean", "It was like a sprinkling of gold-dust along the narrow track of his life". These colloquial expressions and metaphors create better understanding for readers. This passage from Madame Bovary truly reveals the contradictions which exist between Emma and Charles. Emma's fantasies and dreams are which are juxtaposed against Charles' reality. The true thoughts and feelings of Emma's depressing lifestyle are expressed through Flaubert's detailed description and his imagery. 975 words ?? ?? ?? ?? ...read more.