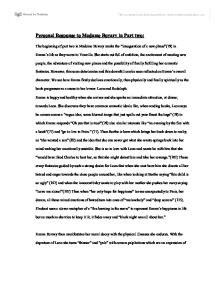 Personal Response to Madame Bovary in Part two: The beginning of part two in Madame Bovary marks the "inauguration of a new phase"(79) in Emma's life as they move to Yonville. She starts out full of ambition, the excitement of meeting new people, the adventure of visiting new places and the possibility of finally fulfilling her romantic fantasies. However, this soon deteriorates and this downfall can be seen reflected on Emma's overall character. We see how Emma firstly declines emotionally, then physically and finally spiritually as the book progresses as a cause to her lovers: Leon and Rodoloph. Emma is happy and healthy when she arrives and she sparks an immediate attraction, at dinner, towards Leon. She discovers they have common romantic ideals like, when reading books, Leon says he comes across a "vague idea, some blurred image that just spells out your finest feelings" (78) ...read more.

and when the innocent baby wants to play with her mother she pushes her away saying "leave me alone!"(107) Then when "her only hope for happiness" leaves unexpectedly to Paris, her dream, all these mixed emotions of hatred turn into ones of "melancholy" and "deep sorrow" (115). Flaubert uses a clever metaphor of a "fire burning in the snow" to represent Emma's happiness in life but as much as she tries to keep it lit, it fades away and "black night was all about her." Emma Bovary then manifestates her moral decay with the physical illnesses she endures. With the departure of Leon she turns "thinner" and "pale" with comon palpitations which are an expression of Emma's extreme depression and gloomy feelings. The introduction of Rodolph makes Emma go out again, to see the show. ...read more.

(105). This shows how dedicated she was but later on, in the process of her recovery, she starts to get "the vague sense that it was just a great hoax" (199). Her spiritual guidence is no longer 'healthy' as she uses it only as an escape from her melancholy and sadness. Overall, Madame Bovary, lets her love emotions guide her life so much that when crushed, they overwhlem her and make a physical manifestations to her body. These manifestations being so extravagant that the phrase "love kills" could almost be applied to her. She lets herself fall in love so quickly, as any man is better than Charles, from her point of view, that she doesn't consider the consequences of these rash desicions. The rash desicions which eventually have moral decay on her being and puts the decay of others (Charles) at risk too. ...read more.