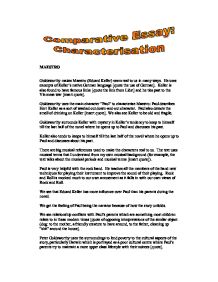 MAESTRO Goldsworthy makes Maestro (Eduard Keller) seem real to us in many ways. He uses excerpts of Keller's native German language [quote the use of German]. Keller is also found to have famous links [quote the link from Lidst] and he ties past to the Viennese war [insert quote]. Goldsworthy uses the main character "Paul" to characterise Maestro: Paul describes Herr Keller as a sort of washed out down-and-out character. Paul also detects the smell of drinking on Keller [insert quote]. We also see Keller to be old and fragile. Goldsworthy surrounds Keller with mystery in Keller's tendency to keep to himself till the last half of the novel where he opens up to Paul and discusses his past. ...read more.

Rock and Roll is mocked much to our own amusement as it falls in with our own views of Rock and Roll. We see that Eduard Keller has more influence over Paul than his parents during the novel. We get the feeling of Paul being the narrator because of how the story unfolds. We see relationship conflicts with Paul's parents which are something most children relate to in these modern times [quote of opposing interpretations of the similar object (dog: to the mother, a friendly creature to have around, to the father, cleaning up "shit" around the house]. Peter Goldsworthy uses the surroundings to lend poverty to the cultural aspects of the story, particularly Darwin which is portrayed as a poor cultural centre where Paul's parents try to maintain a more upper class lifestyle with their soirees [quote]. ...read more.

As a teacher, Keller is more insulting more than inspiring [insert quote] however as most musical teachers say (from my experiences) is that they give criticism to the more gifted students who are putting in the work whereas they all give small comments to the less inspired students. Paul's relationship with Megan characterises his adolescence. From this, Paul becomes quite sexual when the dreaming of Megan and also when he refers to his parents sticking together with the sticky white glue [insert quote]. The sex scene in the library makes him become more sexually aware as well as his newly found lust for Rosie at the concert [insert quote]. Paul is an only child, self centred, arrogant and insensitive [insert quote: 'child enough, self centred enough']. Paul is also detestable and an arrogant teenager through most of the novel but is then to turn into a dependable, mature man by the conclusion of the novel. ...read more.