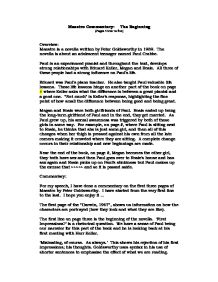 Maestro Commentary: The Beginning (Pages three to five) Overview: Maestro is a novella written by Peter Goldsworthy in 1989. The novella is about an adolescent teenager named Paul Crabbe. Paul is an experienced pianist and throughout the text, develops strong relationships with Eduard Keller, Megan and Rosie. All three of these people had a strong influence on Paul's life. Eduard was Paul's piano teacher. He also taught Paul valuable life lessons. These life lessons hinge on another part of the book on page # where Keller asks what the difference is between a great pianist and a good one. "Not much" is Keller's response, highlighting the fine point of how small the difference between being good and being great. Megan and Rosie were both girlfriends of Paul. Rosie ended up being the long-term girlfriend of Paul and in the end, they get married. As Paul grew up, his sexual awareness was triggered by both of these girls in some way. For example, on page #, where Paul is sitting next to Rosie, he thinks that she is just some girl, and then all of this changes when her thigh is pressed against his own from all the late comers making it crowded where they are sitting. A complete change occurs in their relationship and new beginnings are made. ...read more.

Also, in this paragraph, Goldsworthy describes the hotel as 'a warren of crumbling weatherboard, overgrown with bougainvillea'. Here we see the use of personification, the crumbling weatherboard. The use of this literary device adds emphasis on the setting of the scene, aging the property (the pub). Further on in the second-last paragraph on this first page, the German accent delivered by Keller gives us a sense of character. It characterises him and it makes us want to know a bit more about Herr Keller. From reading the dialect, we can probably understand that he is a German. We find out later in the book that he is from Austria. Paul talks about it being 'too tempting - to slip into comic-book parody.' He is talking about Keller's broad accent but we know that Keller is more than a comic book character. Then, in the last paragraph of the first page, we see Paul talking about what he thinks would improve how he could portray this first impression of Keller. He thinks that maybe if he were a better dramatist then he could perhaps capture it. Then he disagrees with himself and goes on to say that if he 'were more the musician' he could perhaps use his ear to notate the way Keller talks but then says that it would be "too hard work". ...read more.

He uses many descriptions to give us a sense of Keller's height - short, migrant-height, European-height" and just to add to all the different heights, Paul adds 'Wop-height' a degenerative term perhaps used to emphasise Paul's discomfort with the situation and an attempt to feel himself perhaps towering over this authoritarian but obviously short man. While still on the topic of describing Keller, he talks about a pince-nez placed on Keller's nose. A pince-nez is a style of spectacle most commonly found in earlier European times. Compounding Paul's opening description of Keller's skin as "cheap ruined leather", a metaphor is used when Paul says 'If his face was coarse leather, his hands were fashioned from the finest calf: each wrinkle, each dimple carefully hand-tooled.'; In the next paragraph, there is an introduction to a humorous part coming up but you need to have read it before. Paul disbelieves that Keller can have pianists hands because they are too unfunctional and decorative. He even is missing his little finger which he believes makes it impossible to play but then later on in the book, Keller plays Paul a fast sequence of tenths with just the remaining fingers, once again proving his dominance over Paul's misconceptions. This is my analysis of the first three pages of Maestro by Peter Goldsworthy. I have critically analysed it from the first line to the end trying not to leave anything out. Thank you for listening. ...read more.