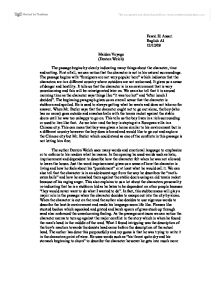 Fawzi El Ansari English A1 12/12/09 Maiden Voyage (Denton Welch) The passage begins by clearly indicating many things about the character, time and setting. First of all, we can notice that the character is not in his natural surroundings. The passage begins with "foreigners are not very popular here" which indicates that the characters are in a different country where outsiders are not welcomed. It gives us a sense of danger and hostility. It tells us that the character is in an environment that is very unwelcoming and this will be reinvigorated later on. We can also tell that it is around morning time as the character says things like "it was too hot" and "after lunch I decided". The beginning paragraph gives us an overall sense that the character is stubborn and spoiled. He is used to always getting what he wants and does not take no for answer. When Mr. Butler says that the character ought not to go out alone, the boy (who has no name) goes outside and smashes balls with the tennis racket against the stable doors until he was too unhappy to go on. This tells us the boy lives in a rich surrounding or used to live like that. As we later read the boy is staying at a European villa in a Chinese city. This can mean that boy was given a home similar to his environment but in a different country however the boy does is bored and would like to go out and explore the Chinese city but Mr. Butler which could stand as one of the conflicts in this passage is not letting him free. The author Denton Welch uses many words and emotional language to emphasize or to enforce to his readers what he means. In the opening he used words such as hate, imprisonment and dependent to describe how the character felt when he was not allowed to leave the house. ...read more.

Just the word imprisonment gives us a sense of how the character is living and how he feels about his "punishment" or at least what he would call it. We can also tell that the character is in an adolescent age from the way he describes the "moth-eaten balls" and how he smashed them against the stable doors using an old tennis racket because of his raging anger. This also explains to us a lot about the characters personality re-indicating that he is a stubborn kid as he hates to be dependent on other people because "they would never want to do what I wanted to do". In fact, this stubbornness will play a major role in the passage when the character decides to escape out into the city by alone. When the character is out on the road the author also decides to use vigorous words to describe the hostile environment and made his language seem life like. Phrases like stunted bushes which squeaked and grated and harsh spears of grass stuck up through sand also embraced the unwelcoming feeling. As the passage continues we can notice the character seems to turn up against the major conflict in the story which is when he found the man's head in the middle of the road. What I found intriguing was the description of the boy's reaction towards the desists head came before the description of the actual head. The author has done this purposefully and my guess is that he was trying to write it in the characters point of view. He uses words such as "his throat quite dry and his stomach beginning to churn" to describe the character however he gets into much more detail when describing the head saying things like "his nose and eyes had been eaten up, his black hair caked with dust, his raw eye sockets" which can't stop the reader from actually imagining a human head with this description. ...read more.

All this can prove that the author has supported his idea well through the use of strong and guttural words and also through the use of imagery and description. The different sounds throughout this passage were not many. The author used words like still and silent to describe the early afternoon but then described the bushes as squeaky as they grated linguistically. I was actually quite surprised not to see any sound description of the boy when he saw the human head such as a scream or aw. The voice and mood related to the diction and imagery is different throughout. In the beginning of the passage the readers can feel anger and hatred from the character towards Mr. Butler, who plays as a minor character, in not allowing the boy to go out into the city. In the middle of the passage the mood is uncomfortable as the boy reaches the head and as the author describes to us the emotions of the boy and what he is seeing. In the end, the mood changes to regret as the boy is running back towards his villa and a sense of desperation to what he has done begins to takeover. The explanation of the theme and central argument is about listening to your elders who understand better about a specific topic. From the passage we can see that the boy wanted to be independent which came from his stubborn attitude and lied to himself stating that "Mr. Butler could not mind my walking in the country" however at the end we reach the stage of desperation and regret for leaving the house in the first place and not listening to what he was told. This passage is just a small part of the actual story Maiden Voyage. Denton Welch has described to us most of the passage in perfect detail and has written it in a way which sends chills throughout every readers when body when they first read it. I felt this whole sense of nervousness when I first read it and the author makes sure you won't stop reading. ...read more.