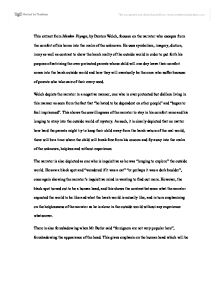 This extract from Maiden Voyage, by Denton Welch, focuses on the narrator who escapes from the comfort of his home into the realm of the unknown. He uses symbolism, imagery, diction, irony as well as contrast to show the harsh reality of the outside world in order to put forth his purpose of satirizing the over protected parents whose child will one day leave their comfort zones into the harsh outside world and how they will eventually be the ones who suffer because of parents who take care of their every need. Welch depicts the narrator in a negative manner, one who is over protected but dislikes living in this manner as seen from the fact that "he hated to be dependent on other people" and "began to feel imprisoned". This shows the unwillingness of the narrator to stay in his comfort zone and his longing to stray into the outside world of mystery. As such, it is clearly depicted that no matter how hard the parents might try to keep their child away from the harsh nature of the real world, there will be a time where the child will break free from his cocoon and fly away into the realm of the unknown, helpless and without experience. ...read more.

As such, the author creates a sense that everything that was taught to him was not true, that everything he knows is not the real thing. And as such, it creates a sense of false hope and false protection, when in fact, he is the most susceptible to the harsh reality of the world outside his comfort zone. Therefore, this brings forth the idea of mocking the over protective parents and their false teachings, which will in turn, cause great harm to the very child they were trying to protect all their life. The flies are described as "a haze" and were "buzzing like dynamos". This shows the vast number of flies as well as the amounts all densely accumulated around this human head. This symbolizes the parents, who act as a shield which surrounds the outside world, as symbolized by the human head, and as such, it is only when he goes close to the object that he sees the harsh reality of the outside world, one which he is not ready to accept. As such, it can be said that the ones who causes the downfall of the over protected child, are the parents themselves. ...read more.

He uses words like "harsh spears of grass" and "dry and sharp as knives" to show the harsh reality of the world. This is used in contrast with the "European villa and a line of poplars", which is the over protection showered upon the narrator by his parents. And as such, the author can be seen to be mocking the naivety of the parents who think that they are able to protect their child for their whole life and think that what they are doing is for the best of the child, when in fact it is the exact opposite as seen by the harsh reality of the real world viewed by the innocent and helpless narrator. The prose ends off with a mocking tone that once the child leaves the comfort zone, there is no way he can come back, once he sees the harshness of the real world, he can no longer be protected by his parents. This is seen where the narrator "ran towards a bastion, wondering if I could climb up to it in anyway", showing the wanting of the child to go back into the safe and sheltered comfort zone, but the author ends us off with a harsh but true sentence: "I knew that I could not". ...read more.