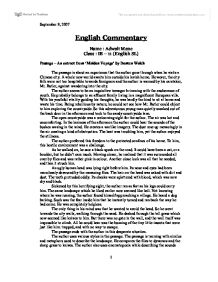 English Commentary Name : Adwait Mane Class : IB - 11 (English SL) Passage - An extract from 'Maiden Voyage' by Denton Welch The passage is about an experience that the author goes through when he visits a Chinese city. A whole new world awaits him outside his lavish home. However, the city folk were not too hospitable towards foreigners and the author is warned by his caretaker, Mr. Butler, against wandering into the city. The author seems to be an inquisitive teenager brimming with the exuberance of youth. He probably belongs to an affluent family living in a magnificent European villa. With his youthful vitality guiding his thoughts, he was hardly the kind to sit at home and waste his time. ...read more.

It could have been a cat, or a boulder, but he didn't care much. Moving closer, he realized that it was surrounded all over by flies and was rather pink in colour. Another close look was all that he needed; and then it struck him. An ugly human head was lying right before him. Its nose and eyes had been mercilessly devoured by the menacing flies. The hair on the head was caked with dirt and dust. The teeth protruded oddly. Its cheeks were splattered with blood, which was now dry and black. Sickened by this horrifying sight, the author ran as fast as his legs could carry him. The same landscape which he liked earlier now seemed like hell. ...read more.

He compares the flies to dynamos and the sharp grass to knives. The author also uses onomatopoeia while describing the sounds coming from the bushes in the sandy plain. A lot of attention has been given to details and the passage itself is very descriptive. The passage gives us the idea that small things can have great consequences. You can never be sure of what life has in store for you. The author was na�ve in not listening to Mr. Butler, but the situation he got into was too terrifying for anyone to deal with. He paid too dearly for his mistake. Another important idea communicated by the passage is the ease with which a young mind can get influenced. Unwittingly, the author digs a grave for himself. This implies that one must never take any action without thinking. This is the underlying idea that we can derive from the passage. September 8, 2007 1 ...read more.