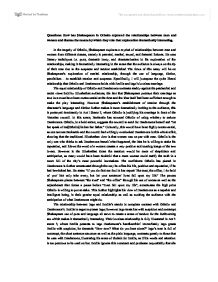 Male and Female Relationships in Othello

Questions: How has Shakespeare in Othello explored the relationships between men and women and discuss the means by which they rule that exploration dramatically interesting. In the tragedy of Othello, Shakespeare explores a myriad of relationships between men and women from different classes, namely in parental, marital, sexual, and fraternal liaisons. He uses literary techniques i.e. puns, dramatic irony, and characterization in his exploration of the relationships, making it dramatically interesting in the sense that the audience is always on the tip of their toes due to the suspense and tension established. The focus of this essay will be on Shakespeare's exploration of marital relationship, through the use of language, diction, parallelism... to establish tension and suspense. Specifically, I will juxtapose the quite liberal relationship that Othello and Desdemona holds with Emilia and Iago's loveless marriage. The equal relationship of Othello and Desdemona contrasts starkly against the patriarchal and racist views held by Elizabethan audiences, the fact that Shakespeare portrays their marriage as true love must have been controversial at the time and the idea itself had been sufficient enough to make the play interesting. However Shakespeare's establishment of tension through the character's language and diction further makes it more dramatically inciting to the audience, this is portrayed dominantly in Act I Scene 3, where Othello is justifying his marriage in front of the Venetian council. ...read more.

compliment to her however 'wench' is a derogatory for working girl or servant, moreover Iago's brief and simplistic language shows his superior attitude towards Emilia. Hence Shakespeare's use of puns and language not only shows Iago and Emilia's loveless relationship but also builds tension and excitement through its foreshadowing of sex. However Iago's belittling of Emilia is not limited to the private domain; even in public he does not lose the opportunity to disparage her. In act II scene 1, Iago mercilessly criticizes Emilia as a lazy and cantankerous woman, Emilia's silence and subservient attitude demonstrate their relationship as patriarchal. Shakespeare's use of puns and parallelism to belittle Emilia creates tension between Desdemona and Iago, which seems to forebode a skirmish hence exciting the audience. When Cassio greats Emilia with kisses, Iago responds crudely with "would she give you so much of her lips/ As of her tongue she oft bestows on me,/ You would have enough." This pun hints sarcastically to kissing as well as scolding, already it is embarrassing enough to be publicly denounced as quarrelsome, however it is even more humiliating as Iago also implies Emilia seems to ready to receive Cassio's kisses. Desdemona attempts to rescue Emilia from such remarks, only to have Iago continue to defame his wife publicly. His invective, though, serves a greater purpose than simply providing a peek at his chauvinistic attitudes. ...read more.

This reflects a fundamental weakness that lies in all relationships between men and woman in Elizabethan times, in Iago and Emilia's relationship as well as Desdemona and Othello's. That is the Elizabethan ideal of woman as silent and obedient and their inferior status will ultimately hinder men and woman relationships, and will ultimately lead to tragedy. Shakespeare's use of language, diction, parallelism, repetition and punning all serve to create tension, in both between the characters and the emotions of the audience. The tension created generates suspense and anticipation of what may follow, thus making the play more 'dramatically interesting' to the audience. Furthermore Shakespeare has used these literary techniques to explore the marital relationship between Othello and Desdemona and Iago and Emilia. Othello and Desdemona's relationship is loving, and appears equal in the sense that sex and race does not seem to pose a problem, however as Shakespeare has repeatedly hinted to us their reasoning behind their love seems to simplistic. Whereas Iago and Emilia's relationship is completely patriarchal, Emilia is treated without respect or trust, whereas she desperately wants to please Iago. Though these two relationships seem to illustrate two opposing extremes on the scale, however both are fundamentally affected by the Elizabethan social standards for woman, thus Shakespeare has illustrated that Elizabethan men and women relationships can not escape the patriarchal norm of society, which will ultimately lead to tragedy and destruction. Word Count: 1745 ...read more.