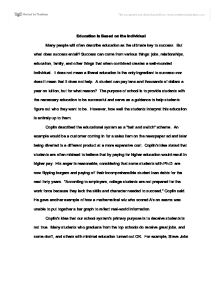 Many people will often describe education as the ultimate key to success. But what does success entail? Success can come from various things: jobs, relationships, education, family, and other things that when combined creates a well-rounded individual.

Education is Based on the Individual Many people will often describe education as the ultimate key to success. But what does success entail? Success can come from various things: jobs, relationships, education, family, and other things that when combined creates a well-rounded individual. It does not mean a liberal education is the only ingredient to success--nor does it mean that it does not help. A student can pay tens and thousands of dollars a year on tuition, but for what reason? The purpose of school is to provide students with the necessary education to be successful and serve as a guidance to help students figure out who they want to be. However, how well the students interpret this education is entirely up to them. Coplin described the educational system as a "bait and switch" scheme. An example would be a customer coming in for a sales item on the newspaper ad and later being diverted to a different product at a more expensive cost. ...read more.

Marshall Gregory, a liberal educator argued students should not only be worried about getting a job but acquiring a liberal education is most important. Referring back to Coplin's idea that education has literally gone down the drain, Gregory speaks from a different point that students need the required liberal studies to be well-rounded individuals (in order to be successful.) "Liberal education represents the last and best--but least understood and least appreciated--mechanism for achieving the fullest development of human potential," Gregory declared. It's obvious that liberal education may not guarantee immediate skills towards a successful career, but Gregory is implying that without it students would not be able to develop into their full potential. After all, the purpose of education is to provide various windows of opportunities for students to explore. Without liberal education, students would be confined from the truth and held from higher intellectual achievements. Nevertheless, there are many students out there that have been successful because of the guidance and offering that these courses have taught. ...read more.

The most important aspect of school is the community and the programs that it offers to the students. Without it, even the best liberal education and thousands of dollars spent to attend private school would be pointless. The success stories you often hear lies with the students' interpretation of college education--what they made of it during their time there, and not what they learned. Blanche Blank mentioned that the education system has been tainted because of the wide spread notion that without education there is little job opportunity. This may hold true in some aspects, but in reality, the education is worth nothing without the students understanding and drive to succeed. This is similar to what Shannon French said when she talked about how soldiers can only confront themselves if they are to cross paths with good and evil. French says that it is up to the individual to gain redemption if he is to become murderous, that he must not learn to excuse his actions but to recognize them if he wants to restore his sense of honor. ...read more.