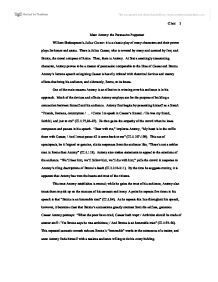 Marc Antony: the Persuasive Puppeteer William Shakespeare's Julius Caesar: it is a classic play of many characters and their power plays for honor and status. There is Julius Caesar, who is revered by many and scorned by few, and Brutus, the moral compass of Rome. Then, there is Antony. At first a seemingly unassuming character, Antony proves to be a master of persuasion comparable to the likes of Caesar and Brutus. Antony's famous speech eulogizing Caesar is heavily imbued with rhetorical devices and oratory effects that bring his audience, and ultimately, Rome, to its knees. One of the main reasons Antony is so effective in winning over his audience is in his approach. Much of the devices and effects Antony employs are for the purpose of building a connection between himself and his audience. Antony first begins by presenting himself as a friend: "Friends, Romans, countrymen / ... ...read more.

A point he repeats five times in his speech is that "Brutus is an honorable man" (III.ii.84). As he repeats this line throughout his speech, however, it becomes clear that Brutus's accusations greatly contrast from the selfless, generous Caesar Antony portrays: "When the poor have cried, Caesar hath wept: / Ambition should be made of sterner stuff: / Yet Brutus says he was ambitious; / And Brutus is an honorable man" (III.ii.93-96). This repeated sarcastic remark reduces Brutus's "honorable" words to the utterances of a traitor, and soon Antony finds himself with a zealous audience willing to do his every bidding. However, even with the trust and devotion of the citizens, Antony remains cautious in presenting his case: O masters, if I were disposed to stir Your hearts and minds to mutiny and rage, I should do Brutus wrong, and Cassius wrong, Who, you all know, are honorable men: I will not do them wrong; I rather choose To wrong the dead, to wrong myself and you, Than I will wrong such honorable men. ...read more.

You are not wood, you are not stones, but men; And, being men, hearing the will of Caesar, It will inflame you, it will make you mad. 'Tis good you know not that you are his heirs; For if you should, O, what would come of it? (III.ii.142-148) Throughout his speech, Antony does not lose his sense for the importance of such subtleties, and in keeping his own feet grounded he keeps his audience hooked. As one of the younger, bolder characters in this drama, Antony is initially portrayed as an overenthusiastic, brash young man. Instead what is revealed in his subtly nuanced speech is the sophistication of a master of persuasion. He skillfully gains the trust of the citizens, appeals to their emotions, and gets his point across while making it seem as though it was their own notion all along. With his crafty use of rhetoric devices and oratory effects, Antony becomes the master puppeteer within the play, controlling every seemingly conscious act of his audience through invisible strings. ...read more.