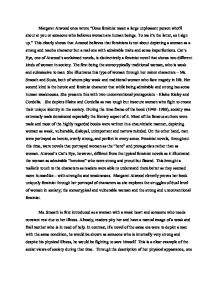 Margaret Atwood once wrote "Does feminist mean a large unpleasant person who'll shout at you or someone who believes women are human beings. To me it's the latter, so I sign up." This clearly shows that Atwood believes that feminism is not about depicting a woman as a strong and macho character but a real one with admirable traits and some imperfections. Cat's Eye, one of Atwood's acclaimed novels, is distinctively a feminist novel that shows two different kinds of women in society. The first being the stereotypically traditional woman, who is weak and submissive to man. She illustrates this type of woman through her minor characters - Ms. Smeath and Susie, both of whom play weak and traditional women who face tragedy in life. Her second kind is the heroic and feminist character that while being admirable and strong has some human weaknesses. She presents this with two unconventional protagonists - Elaine Risley and Cordelia. She depicts Elaine and Cordelia as two tough but insecure women who fight to create their unique identity in the society. During the time frame of the book (1940- 1980), society was extremely male dominated especially the literary aspect of it. Most of the famous authors were male and most of the highly regarded books were written in a chauvinistic manner, depicting women as weak, vulnerable, disloyal, unimportant and narrow minded. ...read more.

On the other hand are Atwood's two uniquely feminist characters - Cordelia and Elaine. Cordelia and Elaine represent the reality of women rather than the supposed roles represented by Mrs. Smeath and Grace. Cordelia represents a very strong but victimized woman of society and Elaine is the unusual central character that is a very passionate and talented with a traumatic childhood, which influences her entire life. Cordelia is first introduced in the beginning of the novel in one of Elaine's first memories. Straightaway, the reader gets the impression of a rebel when the narrative voice says, "We're impervious, we scintillate, and we are thirteen". Through the way they express their likes and dislikes, and the power they thought they had, one can easily make out they are feminists. Atwood uses symbolism when she writes "Cordelia sits with nonchalance, nudging me with her elbow now and then, staring blankly at the other people with her grey-green eyes, opaque and glinting metal. This symbolizes Cordelia's eyes as cold and sharp as metal to show Cordelia's attitude towards others. Cordelia has many traits fit for a heroine - for example her outer self-confidence - she presents herself in an extremely confident manner despite her real feelings inside. Her independence- she is never dependant on anyone to guide her and despite having two sisters and mother to look up to, she lives life her own way almost struggling to create her own place, her own identity in the world. ...read more.

She also develops neurotic habits such as biting her skin, pulling her hair and peeling her skin so she can feel pain and her existence. She also develops fainting fits and has suicidal impulses. She has moments where she is lost and needs help, she is afraid of galleries, and is afraid to express her emotions and all in all she hold a lot in from her past that she needs to let out in order to move on. She is also self-doubting as she has no confidence in her abilities and she is paranoid as to what other women think and say about her. She is always afraid she is going to end up like someone and so takes pleasure in knowing she's stronger than others. She struggles her entire life to create her own identity that is not pre-determined by society. Elaine and Cordelia represent the unique and real female protagonist Atwood creates to represent the true role of women in society. Through her clever way of portraying characters to represent a society much like a normal one rather than a fake one, Atwood explores the detailed struggle in the lives of all four characters, which at a first glance seem very distinct but are interconnected in their roles in the society. Atwood brings forth an unconventional protagonist, who despite being susceptible to weaknesses and flaws manages to gain the admiration of many readers through her actions in life. ...read more.