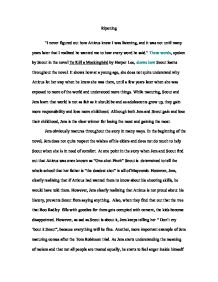 Maturation in How to Kill a Mockingbird

Ripening "I never figured out how Atticus knew I was listening, and it was not until many years later that I realized he wanted me to hear every word he said." These words, spoken by Scout in the novel To Kill a Mockingbird by Harper Lee, shows how Scout learns throughout the novel. It shows how at a young age, she does not quite understand why Atticus let her stay when he knew she was there, until a few years later when she was exposed to more of the world and understood more things. While maturing, Scout and Jem learn that world is not as fair as it should be and as adolescents grow up, they gain more responsibility and lose more childhood. Although both Jem and Scout gain and lose their childhood, Jem is the clear winner for losing the most and gaining the most. Jem obviously matures throughout the story in many ways. ...read more.

As Jem starts understanding the meaning of racism and that not all people are treated equally, he starts to feel anger inside himself and learns right from wrong. As the jury is sending in their votes in and each one is a "guilty", Scout states about Jem that "his hands were white from gripping the balcony rail, and his shoulders jerked as if each 'guilty' was a separate stab between them". When they are leaving, Jem says, "It ain't right, Atticus", showing that he now understands that everyone deserves to be treated fairly no matter what their skin color is. Although Jem might still be considered a child by age, he has overcome that phase by the acts that have happened around him. He has had to lose his childhood due to the events present. Scout also matures; however, she matures in a much different way. In the beginning, when someone would criticize her or talk trash about someone in her family, she would just cower back in fear and not do anything. ...read more.

At school, when people comment on what her father does for Tom Robinson, she can not just let loose and punch everyone. Therefore, she learns to just ignore it and let it go. She also has to do the same thing with Mrs. Dubose when she makes fun of Atticus. As Scout and Jem grow up from the beginning to the end of the novel, they learn about racism, standing up for yourself, and that life is not always fair. Jem and Scout both go through changes. However, in the end, Jem is the one who loses the most childhood. Scout has some childhood left and does not reach the age of where she needs to start acting like a lady and stop acting like a child. Jem on the other hand had reaches the age where he needs to start acting like a grown-up man and care for his family. Jem can no longer act as a child and from now must act like an adult. ?? ?? ?? ?? ...read more.