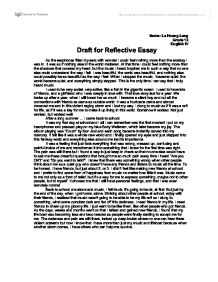 Name: Le Hoang Long Grade 12 English IV Draft for Reflective Essay As the earphones filled my ears with wonder I could feel nothing more than the ecstasy I was in. It was as if nothing else in the world mattered. At that time I could feel nothing more than the shadows that covered my heart, but the music I heard inspired me in such a way that no one else could understand the way I felt. I was beautiful, the world was beautiful, and nothing else could possibly be as beautiful as the way I feel. When I stopped the music, I became quiet, the world became quiet, and everything simply stopped. This is the only time I can say that I truly heard music. ...read more.

The album playing was "Crush" by Bon Jovi and each song became instantly carved into my memory. It felt like it was a whole new world and I finally opened my eyes and just stepped into this fantasy world and everything else around me lost its importance. It was a feeling that just took everything that was wrong, messed up, confusing and painful inside of me and transformed it into something that I knew for the first time was right. The pain was still there but I found a way to just keep in check so that no one else would have to ask me these dreadful questions that brought me so much pain every time I heard "Are you OK?" and "Do you want to talk?". ...read more.

But just by the end of the day, when I got home, alone, thinking about other people at school, enjoy with their friends, I realized that music wasn't going to be able to be my life raft so I clung to something, what some consider dark and fed off this darkness. I need friends in my life. I need friends to cheer up my gloomy life. I just want to be like them, like other people who got friends. As the days, weeks and months went on that I talked and gained new friends, I found that my life boat was becoming less and less needed as people were finally starting to accept me for me. The darkness and pain are still there, locked up deep inside where no one can hear there violent screams but now I know that I have more than just my music and lifeboat because when another storm comes, I have others who can help me survive. ...read more.