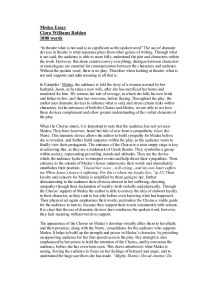 Medea Essay Clara Williams Roldan 1000 words "In theatre what is not said is as significant as the spoken word" The use of dramatic devices in theatre is what separates plays from other genres of writing. Through what is not said, the audience is able to more fully understand the plot and characters within the work. However, this alone cannot convey everything, dialogue between characters or monologues are essential for communication between the characters and audience. Without the spoken word, there is no play. Therefore when looking at theatre, what is not said supports and adds meaning to all that is. In Euripides' Medea, the audience is told the story of a woman scorned by her husband, Jason, as he takes a new wife, after she has sacrificed her home and murdered for him. We witness her tale of revenge, in which she kills his new bride and father-in-law, and then her own sons, before fleeing. ...read more.

Their physical act again emphasises their words, and makes the Chorus a viable guide for the audience to turn to, because they support their words consistently with actions. It is clear that the use of dramatic devices here reinforces the spoken word, however, they lack meaning without words to support. The appearance of the Chorus on Medea's doorstep visually allies them to her plight, and their presence, along with the Nurse, consolidates for the audience who supports Medea. It helps to build up the strength and power in Medea's character, by providing an approving audience for her first speech seen in the play. Her strength is also emphasised by her power to hold the attention of the Chorus, and by extension the audience, before she has even been seen. This draws attention to what Medea is saying, forcing the audience to focus on her feelings of betrayal and anger, and to understand the huge sacrifices she has made. ...read more.

Her composure and immediate, articulate address of the Chorus serves to further underline her weight as a character, and make clear that she is a force to be reckoned with. The effect of her challenging arrival; especially to the body which represents the status quo within Greek society, demonstrates her confidence and convictions, both of which are fundamental in the execution of her plan for revenge. This use of dramatic device then serves to add credence to her words, and convey qualities of her character which assure the audience of her sincerity and resolve. Throughout Medea, Euripides' use of dramatic devices can be seen as they work to emphasise direct speech and accentuate traits within the characters. The movement and entrances of the characters, their appearance to the audience and where their speech is directed adds a deeper level of meaning to the spoken word, helping the audience to interpret the story. However, it can be seen that without the words of the play, dramatic devices would have little use, as it is only when they are used with language that they take on any perceptible meaning or significance. ...read more.