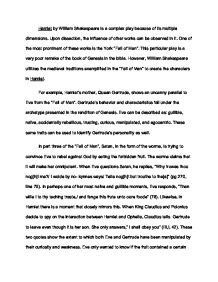 Hamlet by William Shakespeare is a complex play because of its multiple dimensions. Upon dissection, the influence of other works can be observed in it. One of the most prominent of these works is the York "Fall of Man". This particular play is a very poor remake of the book of Genesis in the bible. However, William Shakespeare utilizes the medieval traditions exemplified in the "Fall of Man" to create the characters in Hamlet. For example, Hamlet's mother, Queen Gertrude, shows an uncanny parallel to Eve from the "Fall of Man". Gertrude's behavior and characteristics fall under the archetype presented in the rendition of Genesis. ...read more.

When King Claudius and Polonius decide to spy on the interaction between Hamlet and Ophelia, Claudius tells Gertrude to leave even though it is her son. She only answers," I shall obey you" (III,I, 42). These two quotes show the extent to which both Eve and Gertrude have been manipulated by their curiosity and weakness. Eve only wanted to know if the fruit contained a certain power and Gertrude was interested in her son's apparent "madness" yet both women put aside independent thinking and oblige the villain. Later in the "Fall of Man", Eve brings the forbidden fruit to Adam saying "A worme has done me for to witte/ We shalle be as goddis, thou and I,/ If that we ete/ Here of this tree" (91). ...read more.

When Hamlet confronts her on her actions she retorts with anger that he would dare speak to her in that manner. Both Gertrude and Eve have a mental self image of themselves that is better than what others perceive them as and both women strive to maintain/ improve that image. Gertrude's character directly parallels that of Eve in respect to characteristics and traits. They are both archetypal characters but the resemblances are eerie. The women both end in similar manners as well. Eve eats the forbidden fruit and guarantees her banishment from the Garden of Eden. Gertrude drinks the poison and ensures her own death. The characters have too many similarities to be dismissed as coincidence. Ergo it can be stated with a level of confidence that William Shakespeare utilizes the medieval traditions outlined in the "Fall of Man" to write Hamlet. ...read more.