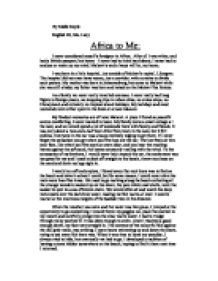 Memoir - Africa to me. My fondest memories are of Lake Malawi. A place I found so peaceful and so comforting, I never wanted to leave.

By Eddie Royle English Hl, Ms. Lacy Africa to Me: I never considered myself a foreigner in Africa. After all I was white, and had a British passport, but home - I never had to think hard about, I never had to analyse or make up my mind. Malawi is and always will be, my home. I was born in a little hospital, just outside of Malawi's capital, Lilongwe. The hospital did not even have rooms, just a corridor, with curtains to divide each patient. My mother was born in Johannesburg, but came to Malawi while she was still a baby; my father was born and raised on the Malawi Tea Estates. As a family we never really travelled overseas. I never really had long flights to foreign places, no shopping trips in urban cities, no cruise ships, no Disneyland, and certainly no tropical island holidays. My holidays and most weekends were either spent in the bush or at lake Malawi. My fondest memories are of Lake Malawi. A place I found so peaceful and so comforting, I never wanted to leave. ...read more.

I had to trudge through rocky patches till it was deep enough to swim. Once I reached a good enough depth, my face went straight in. The contrast of the colourful fish against the dull grey rocks, was striking. I spent hours swimming up and down the shore, trying to see every fish there was. When it was time to leave my paradise, I always tried to hide, but eventually we had to go. I developed a tradition of leaving a stone hidden somewhere on the beach, hoping to find it there next time I returned. I was regularly taken on bush outings by my father. He had learned all his bush knowledge from his parents and he and my Gran would always get me to tag along. They used to take me on little exploring trips. My dad would carefully stalk through the bush lifting up rocks to see what creatures lurked beneath, and my gran scoured the trees and bush floor for orchids, they called it botanising. As a young boy I must have been dragged along to hundreds of these outings, as they told me the Latin names for each plant, although it never really sank in. ...read more.

They hardly blinked, and each moment a bird would swoop by, they would try and identify it in their birding book. Their excited faces gleaming with every find. Eventually they struck up a conversation with us, asking where we were from. I don't remember the adult talk, but I remember when they asked me where I was born, assuming we were all foreigners. I explained how I was born and raised in Malawi. I'll never forget the old man's words, "you're so lucky, so so lucky." Africa as seen through non-African eyes is often all about sadness - starvation, poverty and disease. But that's not Africa, or at least it's just a slice of Africa. To me Africa is a place of insurmountable beauty that many people will never get to see, like the amazing African spirit, so true and so pure; it is a truly remarkable and unwavering place. I suppose I am very fortunate to have witnessed the "true Africa" and seen all the wonders it possesses. I know now, how it feels to fall asleep to the lion's roar, and to wake up to the guinea fowl's cry. ...read more.